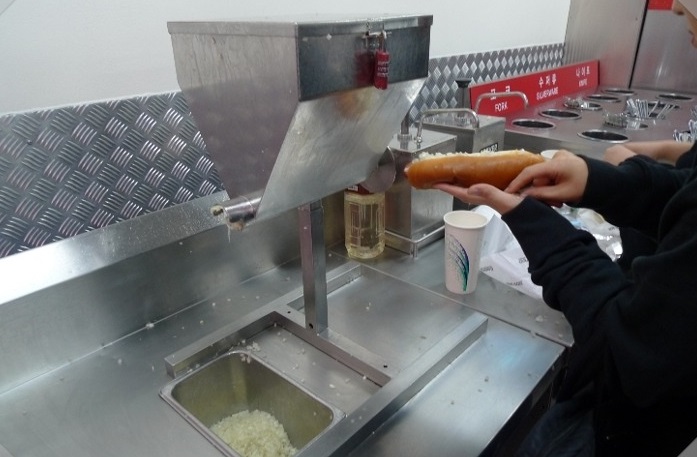 Since Costco customers were allowed to take as much as they wanted, sightings of individuals bringing plastic bags or plastic containers to fill up with onions had become somewhat common. (image: Online community)

Online commentary has suggested that the move is a natural consequence of overindulgence on the part of Korean consumers, and that Costco customers had it coming for stealing the free onions.

Costco Wholesale Korea said that since last week, it has decided to remove onion dispensers, which were a staple at the company’s food courts nationwide, and provide minced onions only to consumers who purchase hot dogs.

The company has been operating dispensers to provide customers with diced onions at food courts that sell pizza and hot dogs.

However, since customers were allowed to take as much as they wanted, sightings of individuals bringing plastic bags or plastic containers to fill up with onions had become somewhat common.

That’s why even the words “onion beggars” and “onion thieves” arose.

Regarding Costco’s decision, many netizens were disappointed and ashamed of customers who do not know when to stop. Moral and good citizens are suffering from the bad deeds of other customers.

Meanwhile, in the early days of Swedish furniture giant IKEA’s entry into South Korea in 2015, the company quickly ran out of the pencils placed in stores for customers to jot down notes or measurements as they shop.