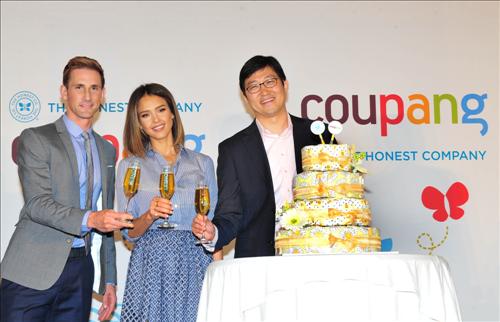 U.S. actress Jessica Alba (center) poses with Coupang CEO Kim Beom-suk (R) and Christopher Gavigan, co-founder of The Honest Company on May 28, 2015 to announce the business deal between the two companies. (Image: Coupang)

SEOUL, May 28 (Korea Bizwire) – South Korean e-commerce platform operator Coupang said Thursday it has clinched an exclusive deal with a U.S. consumer goods maker founded by American actress Jessica Alba to sell its products in the local market, a move seen as helping to solidify its status as the country’s top social commerce provider.

Under the deal, Coupang will sell some 120 different kinds of consumer goods produced by The Honest Company, such as shampoos, diapers, vitamin supplements and other beauty and fashion-related products.

“(Consumers) are now able to buy Honest-made goods easily, which will be delivered safely by our staff members,” Coupang founder and CEO Kim Beom-suk said. “Coupang is growing to become an e-commerce platform that provides everything mothers can imagine and wish for.”

Kim said his company also seeks to expand ties with other global consumer-goods producers down the road.

Coupang, the country’s top deal-of-the-day website operator, said The Honest Company will benefit from what it calls its “rocket shipping service,” in which Coupang directly delivers products without outsourcing.

The Honest Company said it boasts more than 11,000 items being shipped daily, adding that social network-based sales platforms such as Coupang will also lend support to its sales.

“The delivery service that Coupang does is top-notch. It is the best in the world. It is what everyone should have. We are thrilled to be partnering with Coupang,” Alba said during a press conference here.

She said the Honest Company listens to its customers online quickly and easily. “I think what people love about our company is that (our product) is healthy for the whole family,” Alba said.

Christopher Gavigan, a co-founder of The Honest Company, said Coupang was chosen as its exclusive partner as the South Korean firm is “digitally native.”

When asked if The Honest Company wishes to maintain its policy of clinching an exclusive deal with just one e-commerce firm for other countries, Gavigan replied “it is too early” to speak on the matter, but said “we want to focus on a careful and exclusive relationship.”

The Honest Company, which boasts 2,500 offline stores in the United States and Canada, was kicked off in 2012 in California. It claims its goal is to roll out environment-friendly products that contribute to consumers’ health.