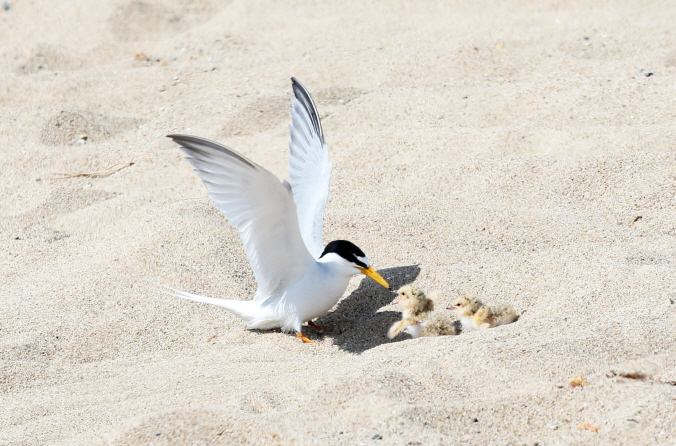 Little terns are summer birds that live on the coast or riversides throughout South Korea. They lay eggs between late April and July. (Yonhap)

Last Thursday, two tern chicks were found on the coast of Pohang, recently hatched from eggs. A pair of female and male terns were scrambling to feed the chicks and to keep them warm.

There were four more nests in the area, where five pairs of little terns laid their eggs. Compared to last year, when little terns came in dozens to lay eggs across 20 nests, the numbers dropped significantly.

Last year, mountain bikers were in many cases responsible for destroying the nests and the eggs as they tore up the area.

Some members of a local photography club built sand walls around nests and forced chicks to stay there to take ‘good’ pictures. Adult little terns couldn’t take proper care of their chicks because of indiscreet human visitors.

Some people would accidentally break the eggs since the nests are small, and the eggs are similar in color to the sand.

After a series of accidents like these, several wildlife photographers warned that little terns will not return to Pohang if the accidents continue to happen.

This year, however, some photographers have returned to bother the little terns once again. There was a case recently where some tied up a little tern’s legs so that it wouldn’t run away while they did a photoshoot.

“I found two photographers tying up a baby tern’s legs for a photo. I was furious and drove them away,” said a local photographer. 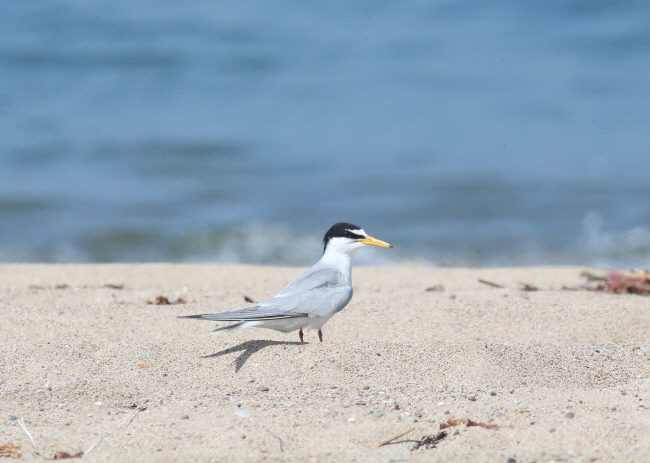 Unlike last year when Pohang set up signs asking visitors to refrain from riding motorbikes in the area, the city is failing to take any measures this year.

Little terns are summer birds that live on the coast or riversides throughout South Korea. They lay eggs between late April and July.

Little terns breed mainly in South Korea, Japan, and China, and migrate to the Philippines, Australia, India, and Sri Lanka in winter.

“Just take photos of nature as it is. Don’t ruin it,” a local photographer said.