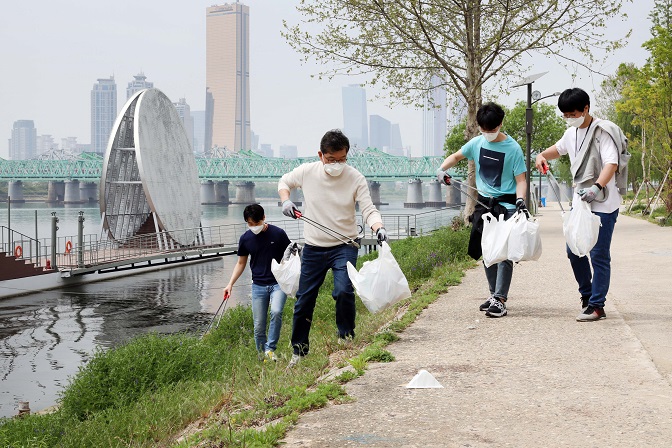 SK Innovation Co. employees pick up trash at a Han River park in Seoul in this photo provided by the company.

SEOUL, June 14 (Korea Bizwire) — In recent days, the way corporate social responsibility (CSR) activities are performed is changing, as they are evolving towards embracing fun factors to encourage the voluntary participation of employees in small groups.

This trend comes as the share of the MZ generation, referring to those born between 1980 and 2010, is growing on company payrolls and it became difficult to have collective volunteering activities due to the COVID-19 pandemic.

The Cheongju business site of memory semiconductor manufacturer SK hynix Inc. delivered a donation of 35 million won (US$31,370) to the international charity Save the Children as part of its IT device support program for those in need.

It was an ordinary fundraising activity but the way it was conducted was somewhat different from previous programs.

Roughly 1,600 employees participated in the program, which kicked off in April, with their cumulative steps reaching about 511 million steps. As promised, the company delivered the donation.

Starting from this month, refinery-to-battery maker SK Innovation Co. has been engaged in a voluntary ‘plogging’ campaign. Plogging is a combination of jogging or strolling with picking up litter.

This campaign has been underway at the company’s business sites in Seoul and Ulsan.

After forming small four-member groups, the workers can perform the plogging activities at the time and location of their choice, and submit the waste plastics they have collected to the company.

SK Innovation plans to make upcycled products using the collected waste plastics and donate them to the vulnerable in the society.