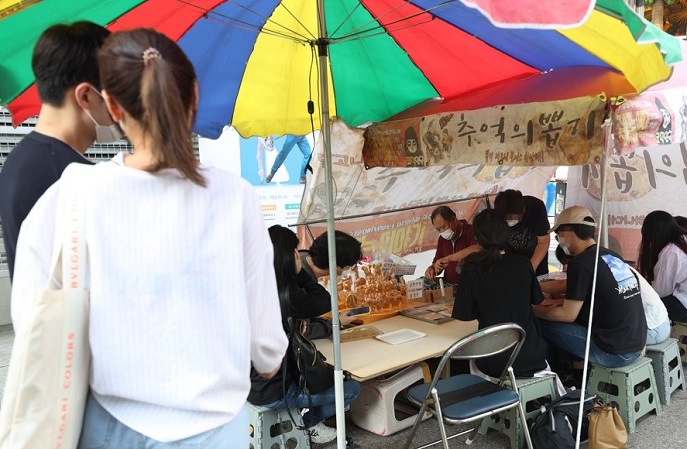 People enjoy “dalgona bbobggi” by a street vendor in Seoul on Sept. 30, 2021, as the nostalgic Korean game is rapidly gaining popularity around the world thanks to mega-hit Netflix series “Squid Game.” Dalgona is simply made of sugar and baking soda. (Yonhap)

SEOUL, Oct. 6 (Korea Bizwire) — An elderly couple that has been selling Korean sugar candy “dalgona” in Seoul’s main theater street of Daehangno for 25 years hit the jackpot after creating the dalgonas that appear in the Netflix original Korean drama series “Squid Game.”

Social media has been flooded with posts of photos and videos of the couple’s dalgona store teeming with customers.

Lim Chang-joo and Jeong Jeom-sun were asked by Netflix last year to come to the studio and make dalgonas for three days.

The couple said that they had to make dalgonas all day long, from 8 o’clock in the morning to late at night.

“We used 15 kilograms of sugar. I think we made around 300 dalgonas,” the couple said. “Dalgonas with even the slightest burns on the edge couldn’t be used in the show, so we had to remake them many times.”

Most of the customers at the couple’s dalgona shop challenged themselves with the ‘umbrella’ dalgona. It was the hardest shape to make during Squid Game’s dalgona round.

Out of numerous challengers, only a couple customers have succeeded in making the umbrella shape, the couple said.