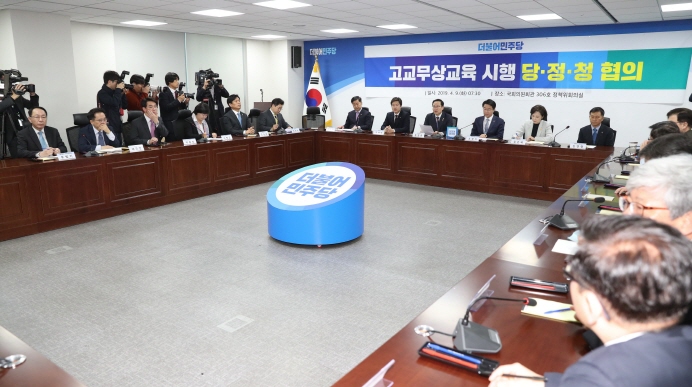 Officials from the presidential office Cheong Wa Dae, the government and the ruling Democratic Party hold a meeting at the National Assembly on April 9, 2019, to discuss the introduction of free education for high school students. (Yonhap)

To this end, authorities will begin free education for high school seniors in the fall semester and expand it to students in their second and third years of high school next year.

The detailed plan was revealed at a meeting among officials from Cheong Wa Dae, the education ministry and the ruling party held at the National Assembly.

The introduction of free education for high school students is a top priority in the education sector under the Moon Jae-in administration as the country seeks to become an inclusive nation.

“The right to receive an education is a basic right stipulated in the Constitution. Along with elementary and middle schools, the provision of free education for high school students is a necessary task to realize such a basic right,” DP floor leader Hong Young-pyo said at the start of the meeting.

The ruling party said 2 trillion won (US$1.75 billion) of funding will be needed every year if all high school students are to get free education.

The expenditure needed to expand free education will be shared by the central government and regional education offices, with each side covering roughly half, according to the participants of the meeting.

They expressed hope the move will guarantee the people’s right to education and help ordinary people reduce their expenditure on education.

Hong said the disposable income of low-income families could increase by 130,000 won with the introduction of free high school education.

Koo Yoon-cheol, a vice finance minister, said if free education is expanded, a household with one high school student is expected to save 1.58 million won per year.

The DP said it will do its best for the National Assembly to pass the relevant education bills in the first half of the year to back up the government’s free education drive.

But some experts raised concerns that the financing for free education may face a setback as the operation of free education would half depend on superintendents’ cooperation.

The government claimed that as superintendents share a need for free education and state subsidies will be provided, there would be no problem in financing the project.

But experts said there is a possibility that superintendents could voice the need for state responsibility for free education later and reject contributions, as indicated in the uproar involving the education offices’ refusal to set aside budget for “Nuri Course.”

In 2016, the education offices called for the government to offer state funds for the operation of the program, which calls for the provision of pre-school fees and child care benefits to children aged between three and five.

But as the government led by President Park Geun-hye refused to provide state financial support, the education offices did not allocate budget for the program, causing some preschools to close or suspend their operations.