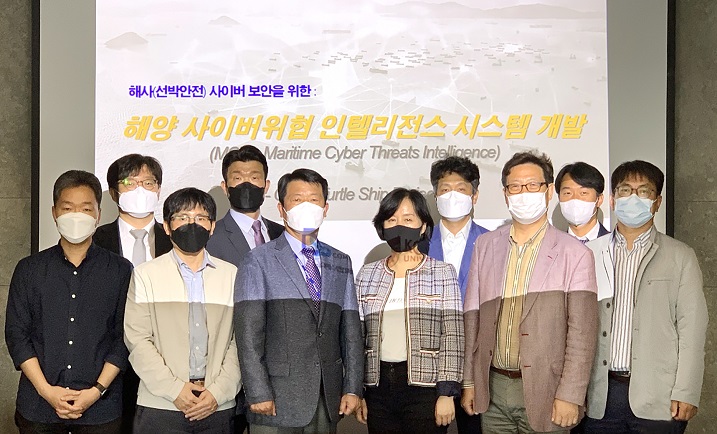 Officials from Daewoo Shipbuilding & Marine Engineering Co. (DSME) and local cybersecurity companies pose for a picture after wrapping up their workshop on cybersecurity technology development that was held at the headquarters of DSME in Seoul on June 15, 2021, in this photo provided by DSME on June 16.

To that end, the shipbuilder will team up with local cybersecurity companies, including maritime cybersecurity startup DSLAP Company, and Korea University by 2022, it said.

The project was also helped by the ocean ministry amid growing demand for cybersecurity for remote autonomous ships, smart ships and smart battleships that have been being developed at a fast pace, DSME said.

DSME will test and adopt the developed cybersecurity technologies on its ships, it said.

Under the guidelines of the International Marine Organization (IMO) on maritime cyber risk management, which went into effect this year, shippers and shipbuilders should secure technologies and systems to brace for cyberthreats and cyberattacks, DSME said, citing data that cyberattacks on ships rose tenfold over the past three years.