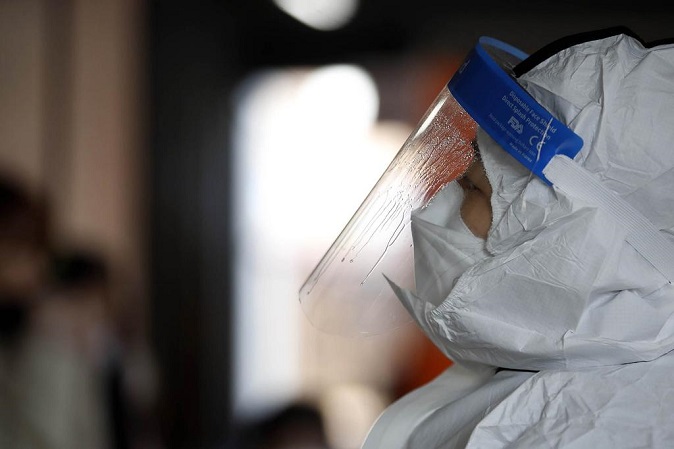 A health worker closes their eyes while working at a makeshift COVID-19 testing station in the southwestern city of Gwangju on Jan. 21, 2022, in this photo provided by a local government.

SEOUL, Jan. 22 (Korea Bizwire) — South Korea’s daily coronavirus cases jumped to over 7,000 for the first time in a month on Saturday amid the fast spread of the omicron variant.

The country added 7,009 new COVID-19 infections, including 6,729 local infections, raising the total caseload to 726,274, according to the Korea Disease Control and Prevention Agency (KDCA).

It is the first time since mid-December that the number of daily infections stayed above 7,000.

The number of critically ill COVID-19 patients stood at 433, the KDCA said.

As of 9 p.m., the country had added 6,670 new COVID-19 cases, up 819 from the same time the previous day, according to health authorities and city governments. Daily cases are counted until midnight and announced the following morning.

The health authorities have warned of a resurgence in the number of infections as the highly transmissible omicron variant could become the dominant COVID-19 variant in South Korea.

The detection rate of the omicron variant reached 47.1 percent this week, and it is likely to account for more than half of all infections next week, according to the KDCA.

As the daily tally exceeded 7,000, the authorities are expected to shift to a new medical response system as planned in order to handle the pandemic in a flexible manner.

Under the new system, rapid antigen tests will be introduced at COVID-19 testing centers to produce faster results, while polymerase chain reaction (PCR) tests will be reserved for high-risk groups.

COVID-19 testing and treatment will be possible at local clinics and hospitals, depending on the result, and the self-quarantine period for patients will also be shortened from the current 10 days to seven, the KDCA said.

Before the full implementation, the government decided to launch the system starting Wednesday in four regions — the southwestern city of Gwangju, South Jeolla Province and the Gyeonggi Province cities of Pyeongtaek and Anseong, all of which reported a large number of omicron infections. 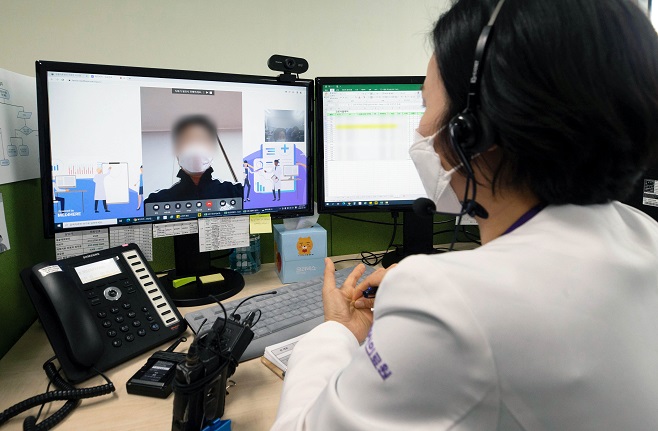 A medical worker talks to a coronavirus-infected patient via video link at a medical facility in Seongnam, near Seoul, on Jan. 21, 2022, as the patient is being treated at home with Paxlovid, COVID-19 treatment pills developed by U.S. pharmaceutical giant Pfizer Inc. (Pool photo) (Yonhap)

Amid deepening woes, the government has implemented toughened antivirus curbs, including a 9 p.m. curfew on restaurants and cafes, which have been in place since mid-December and will remain effective until Feb. 6.

Currently, the limit on the size of private gatherings is set at six, and the vaccine pass program is required at several kinds of multiuse facilities, including cafes, restaurants and sports arenas.

This week, the government also began implementing extra antivirus steps ahead of the Lunar New Year holiday. This year’s Lunar New Year falls on Feb. 1, and the holiday lasts until Feb. 2.

During the two-week special quarantine period from Thursday, face-to-face meetings at nursing facilities will be banned, and non-contact meetings will be allowed only after prior reservations.

Dining in at highway service areas will be banned, the KDCA said, adding that nine temporary COVID-19 testing stations will be set up at highway rest areas, and bus and train stations across the country.

Of the locally transmitted cases, 66.3 percent were from the metropolitan region. Seoul reported 1,535, and the surrounding Gyeonggi Province and the city of Incheon, west of Seoul, added 2,383 and 542 new cases, respectively.

The number of infections in non-metropolitan regions has grown at a fast pace in recent days, exceeding 2,000 for the first time since the pandemic this week. On Saturday, the figure stood at 2,549.

As of Saturday, 43.78 million people, or 85.3 percent of the country’s 52 million population, have been fully vaccinated, and 24.97 million, or 48.6 percent, have received booster shots, the health authorities said.