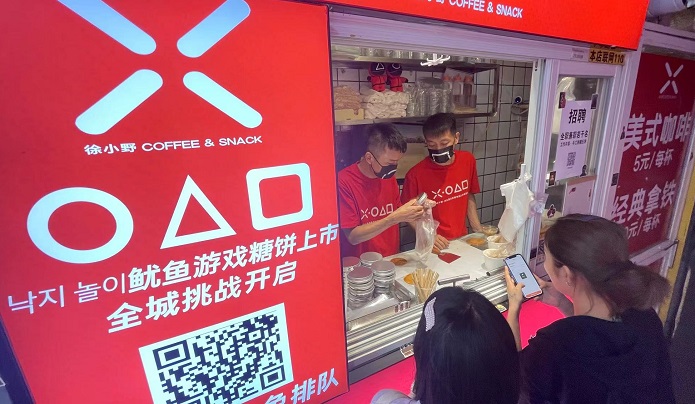 Customers wait for an employee to serve Korean-style sugar candy, known as “dalgona” or “ppopgi” in Korean, at a shop in Shanghai on Oct. 12, 2021. (Yonhap)

SEOUL, Oct. 13 (Korea Bizwire) — Korean-style sugar candy “dalgona,” made by melting sugar and frothing it up with a pinch of baking soda, is gaining popularity in China as the mega-hit Netflix series “Squid Game” continues to gain fame worldwide.

The candies were sorted by their level of difficulty–ranging from circular shapes to umbrellas–sold at 10 yuan (US$1.55) each. Circular metal boxes and needles were also available.

Chinese media reported that most of the items have appeared alongside Squid Game’s rising popularity.

They have also pointed out that many dalgona candies lack quality control, and are sold at different prices.

While Netflix is not available in China, some 60 Chinese piracy websites have illegally distributed the series.

Weibo showed that the number of views for posts with “Squid Game” hashtags has surpassed 1.94 billion.