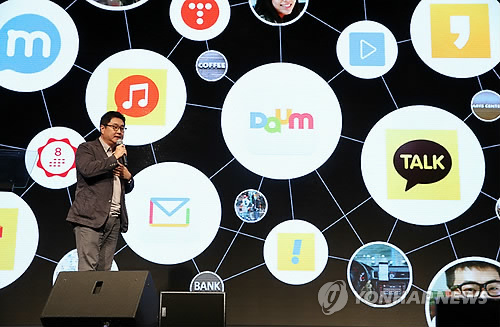 The company’s co-CEO Choi Sae-Hoon spoke about his ambitious plan concerning fintech based services during a conference call.

SEOUL, Feb. 15 (Korea Bizwire) – Daum Kakao, a company formed by the merger of leading web portal Daum and mobile messenger service company Kakao Talk, saw increased growth in its mobile sector, which accounted for 53 percent of sales in Q4 of 2014 and 49 percent of sales in 2014. The figure in 2014 was an increase of 11 percent from 2013.

Putting behind negative remarks that the merger would result in temporary chaos, Daum Kakao’s net profit in Q4 of 2014 increased 36 percent to 50.6 billion won (US$ 46 million) from 37.2 billion won (US$ 33 million) in Q4 in 2013. The company’s operating profit and sales also increased 71 percent and 21 percent respectively for the fourth quarter from a year earlier. These earnings were based on increased growth in its mobile services sector.

Daum Kakao saw the most notable growth in its e-commerce service among its mobile offerings. The company’s Q4 e-commerce sales in 2014 rose 171 percent from sales during the same period in 2013. Half of the sales were derived from the Kakao Talk application, while 30 percent of the sales came from Kakao Story.

However, Daum Kakao is certainly not satisfied with having just one successful year. It is planning to invest aggressively to develop new mobile services, which are ultimately to be integrated into one coherent Daum Kakao mobile platform.

The company’s co-CEO Choi Sae-Hoon spoke about his ambitious plan concerning fintech based services during a conference call. He said that the company is developing products related to its mobile pay service Kakao Pay and money transfer service Bank Wallet Kakao, under a supposition that there will be a massive inflow of customers into the company’s mobile pay services in the near future.

He said that the company would launch its first mobile game service in China in the second quarter. Daum Kakao is also planning to launch several video streaming related services in this year.

The company is also planning to double its investment in marketing, by up to 80 billion won (US$ 72 million), compared to last year.