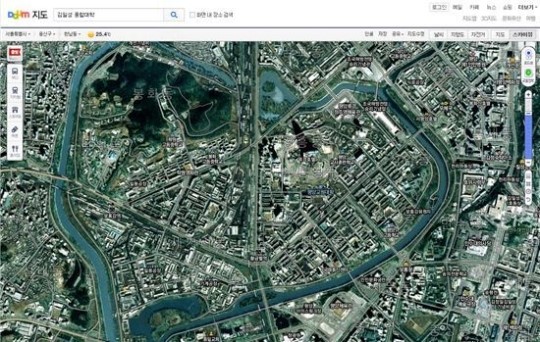 On a zoomed-in map one can even see buildings and train stations that were considered confidential in the hermit kingdom. (image: Daum)

SEOUL, Aug. 31 (Korea Bizwire) – Daum Communications has started providing map services for North Korea from 5 pm on August 29. This is the first occasion among domestic online portals. The map services are available on desktop computer, mobile web, and mobile app. Until now, users could find important landmarks only such as Pyungyang, Kaesong, Nampo, and Mt. Kumgang, with no further details on the map.

Beginning March this year, however, the Ministry of Land, Infrastructure, and Transportation made available to the public topographic maps, satellite maps, and digital topographic data of North Korea that have been available only to government organizations dealing with North Korean issues. Daum has created the “Skyview” service by interpolating the data on its own digital maps.

With Skyview, the users can now see the administrative divisions and all small town information clearly on the map, with the road network marked on it. On a zoomed-in map one can even see buildings and train stations that were considered confidential.

Jin Yoo-seok, Daum’s team leader in charge of spatial information, said, “We used the topographic information made public by the National Geographic Information Institute to create the Skyview map. This is an excellent tool for those with families in North Korea to check out their hometown. For general users, this will be a means to understand the north better.”