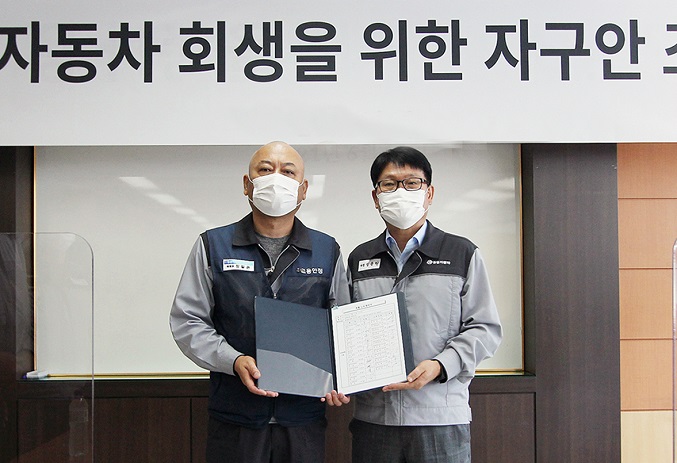 SsangYong Motor Co.’s labor union chief Jung Il-kwon (L) and court-appointed manager Chung Yong-won pose for a photo after signing an agreement on self-help measures for the financially troubled automaker at its Pyeongtaek factory, 70 kilometers south of Seoul, on June 14, 2021, in this photo provided by SsangYong.

SEOUL, June 14 (Korea Bizwire) — Half of SsangYong Motor Co.’s workers will go on unpaid leave for two years beginning next month as part of self-help measures as the debt-ridden automaker is striving to speed up its sales process, the company said Monday.

SsangYong said its management and labor union inked a deal on the corporate restructuring plan and will carry out the measures in July after ironing out the details.

Over half of SsangYong workers last week voted for the company’s proposal of a two-year unpaid leave to half of its 4,800 employees, as well as cut in their wages and other welfare benefits to stay afloat with cost-reduction efforts.

The company also plans to sell further assets to raise funds and not to hire new employees over the next five years to streamline its structure, while the union promised to stage no strike for years to come.

The automaker has been under court receivership since April as its parent, Indian parent Mahindra & Mahindra Ltd., failed to attract an investor amid the prolonged pandemic and worsening financial status.

SsangYong said the unpaid leave is a “reasonable” and “effective” way to cut labor costs and maintain employment without massive layoffs, hoping it will speed up the prolonged merger and acquisition (M&A) process.

“The restructuring plan provides the momentum for a successful M&A under favorable conditions,” SsangYong said in a statement. 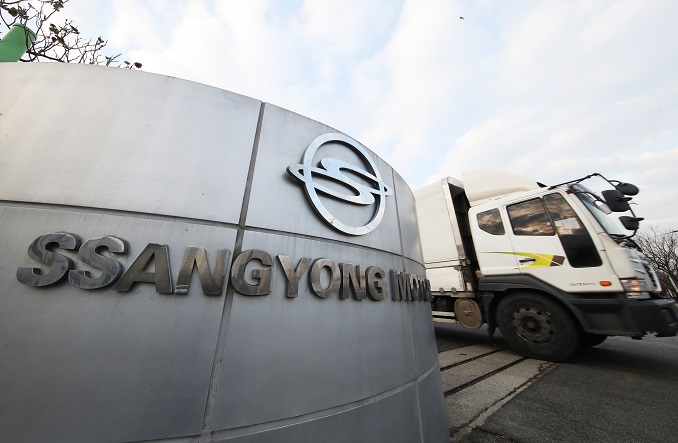 SsangYong said it will submit the rehabilitation plan to the Seoul Bankruptcy Court, which is expected to post a notice for an auction later this month.

Lee Dong-gull, governor of the state-run Korea Development Bank (KDB), a main creditor of SsangYong, told reporters that it will decide on whether to give financial help to the carmaker if the rehabilitation plan is feasible.

The self-rescue measures that will force half of SsangYong’s workers to go on unpaid leave were a “step forward,” but are “insufficient,” Lee told reporters.

The KDB will provide financial support to SsangYong if the carmaker attracts an investor with management capability, Lee said.

The SUV-focused automaker has scaled down the production due to a shortage of supplies and weak demand, and currently rolls out about 8,000 vehicles a month with a double shift system.

In December, SsangYong filed for court receivership after failing to obtain approval for the rollover of 165 billion won (US$147 million) worth of loans from creditors.

Under court receivership, SsangYong’s survival depends on whether there will be a new investor to acquire a streamlined SsangYong after debt settlement and other restructuring efforts.