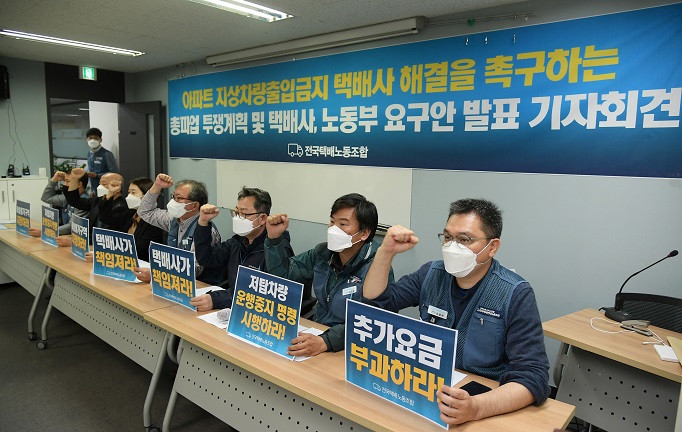 Unionized delivery workers announce a partial strike during a press conference in Seoul on May 7, 2021. (Yonhap)

SEOUL, May 10 (Korea Bizwire) — Unionized delivery workers said Monday they will withhold their planned strike following the government’s offer to address their grievances through a formal consultative body.

The reversal came three days after the delivery workers’ union announced a partial strike on a future undetermined date in protest of a ban on ground-floor parking at a mega apartment complex in eastern Seoul.

The union warned that should the consultative body prove to be insincere or fail to produce an agreement, the strike will immediately be back on as planned.

“The government made clear that they intend to resolve the issue,” the union said in a press release. “We will temporarily withhold the strike while the consultative body undertakes fundamental discussions.”

The proposed council involves the land ministry, the labor ministry, logistics firms and the union, but excludes representatives of the apartment complex.

The union said their absence will be taken as an indication that the government and logistics firms will be allowed to charge extra for deliveries in the event that the ban remains in place.

The dispute began after residents of the 5,000-unit complex required delivery trucks to use only underground parking spaces, citing concerns about their safety.

Delivery workers have balked at the rule, arguing that their vehicles cannot enter the garage due to the maximum height clearance, forcing them to use carts to move packages from the complex’s entrance to customers’ doors.

The council’s first meeting is expected to be held later this week.