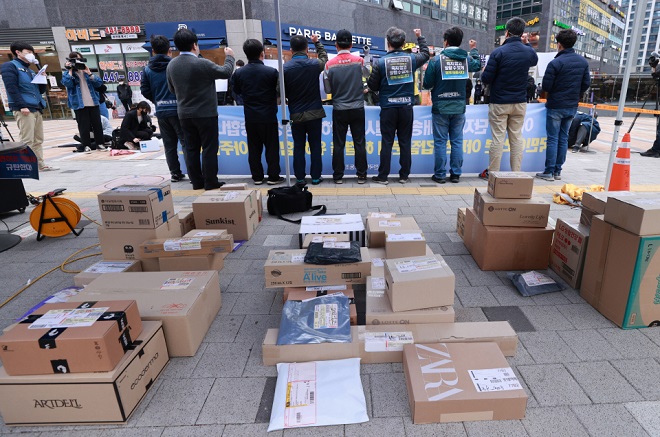 A delivery workers’ union holds a press conference to announce the suspension of door-to-door delivery service at an apartment complex in eastern Seoul on April 14, 2021. (Yonhap)

SEOUL, May 7 (Korea Bizwire) — Unionized delivery workers have voted to go on strike in protest against a ban on ground-floor parking at a mega apartment complex in eastern Seoul, their union said Friday.

Around 2,000 workers will join the strike, the date of which will be determined later by the union’s chief, the union said.

That the union did not decide to stage an immediate walkout was the result of consideration that the government has been working with logistics companies to come up with measures to solve the issue, according to the union.

The date for a walkout will be determined “in a manner to minimize inconvenience to customers,” it said, adding that the delivery of fresh produce, around 10 percent of the total parcel volume, will be affected most by the strike.

The vote followed a monthlong conflict between deliverymen and the residents of a more than 5,000-unit complex over a rule that requires delivery trucks to use only underground parking spaces for residents’ safety.

Most of the delivery trucks, however, are unable to enter the underground parking garage due to the maximum height clearance, and delivery workers are forced to carry loads of packages from the complex’s entrance to customers’ doors, using carts.

The two sides have been locking horns.

The residents have urged the workers to modify vehicles to clear the height limit or deliver packages using carts.

The workers dismissed the demand as senseless and claimed that lower trucks posed greater health risks, not to mention it costs money, and carrying packages for a distance made them work longer hours.