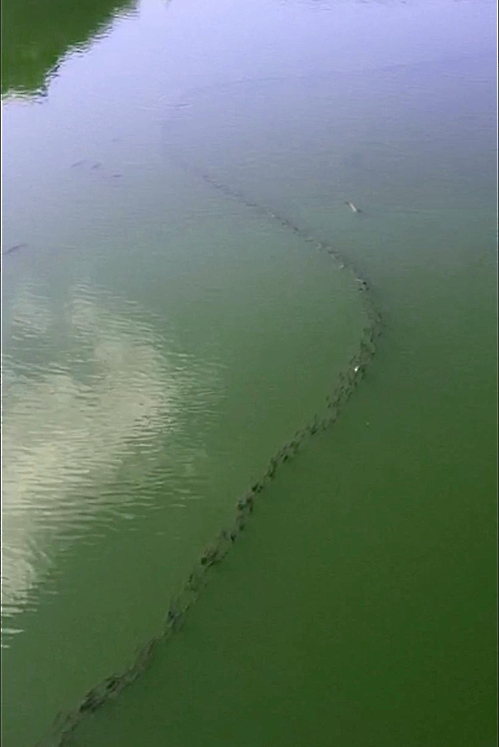 “Grey mullets do swim back and forth in rivers and seas in groups, but swimming in a single file is something I’ve never seen.” (image: Yonhap)

ULSAN, Sept. 22 (Korea Bizwire) – A video of grey mullets swimming in single file captured media attention on August 30. The rare footage, filmed at Ulsan’s Taewha River, showed thousands of fish making up a single line that went on for at least two kilometers according to the witness.

But the video has now been brought back to the spotlight after Korea’s record earthquake on September 12, and the hundreds of aftershocks that have since followed, with some questioning if the unusual fish behavior was a precursor to the historic tremors.

The Taewha River flows some 46 kilometers into Ulsan Bay, less than 40 kilometers south of Gyeongju, the epicenter of the recent quakes.

“I thought it was very strange,” said An Ju-taek, who captured the unusual phenomenon. “But thinking about it now, I’m curious if it was actually a sign of the coming earthquake.”

“I saw the same thing, at the same place, the next day on the 31st,” he added. “From what I saw, the line was two to three kilometers long, and since it seems to have continued for two days straight, tens of thousands of fish must have migrated.”

In the video, a few large carp the size of a grown man’s arm are also visible, appearing to escort the procession.

“Grey mullets do swim back and forth in rivers and seas in groups, but swimming in a single file is something I’ve never seen,” said researcher Seo Young-seok from the Gyeongbuk Freshwater Resources Center. “I’m also not aware of any academic research over such behavior.”

Although Seo suggested that they may have been migrating to colder waters to avoid higher temperatures, he was still “not certain.”

“As far as I know, there are no circumstances in which fish evacuate in hoards as a precursor to an earthquake,” he said.

Amid the fears over the tremors, July’s mysterious gas odor that swept across Busan and Ulsan, and another video of a swarm of dead ants at Busan’s Gwangalli Beach have also been brought back to attention, with netizens spreading whispers that they were in fact signs of an impending earthquake.

The government dismissed all rumors related to the gas odor in August, saying that the smell was from a leak of odorants in Busan, and a chemical complex in Ulsan. The claims over the ant video have also been refuted by experts.