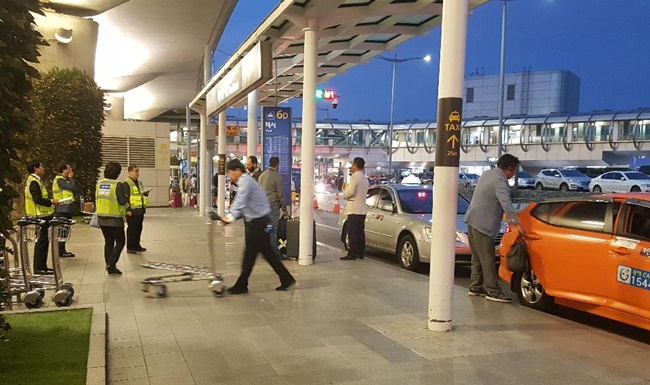 In a first, nine taxi drivers who charged foreign customers unfair cab fares will not be able to operate at the airport for 60 days. (Image: Yonhap)

In a first, nine taxi drivers who charged foreign customers unfair cab fares will not be able to operate at the airport for 60 days.

The move comes after a list of dishonest taxi drivers banned from operating at the airport was sent to the Incheon International Airport Corporation, the Seoul Metropolitan Government said on Wednesday.

The nine taxi drivers have already faced punitive measures from the Seoul government.

One driver was found to have refused to return 9,600 won in change to a Chinese customer who travelled from a location near City Hall in Seoul to the Plaza Hotel.

Another driver who drove a foreign customer to Olympic Park charged an extra fee, with the taxi fare adding up to 70,000 won.

The taxi fare for the route is usually around 55,000 won.

While taxi drivers in South Korea can charge an extra fee for a journey that crosses city borders, those based in Seoul can’t do so when traveling to Incheon Airport, which is designated as one of six joint business districts by the Ministry of Land, Infrastructure and Transport.

Though several taxi drivers have been banned by the Incheon International Airport Corporation in the past for illegal acts such as haggling, unfair taxi fares, and refusing passengers, it’s the first time that a local government has sent a blacklist to weed out unethical drivers at the airport.

Taxi drivers who are caught for the first time will be banned from entering the airport for 60 days, while second offenders will face a 120-day ban, and those reaching a third strike will face a permanent ban.

“Some taxi drivers play with the meter or rip-off customers on a small scale in an attempt to go under the radar. All illegal acts will be dealt with seriously, even if they involve only a small amount of money, as they can damage the country’s reputation,” said Yang Wan-soo, a senior official at the Seoul Government.