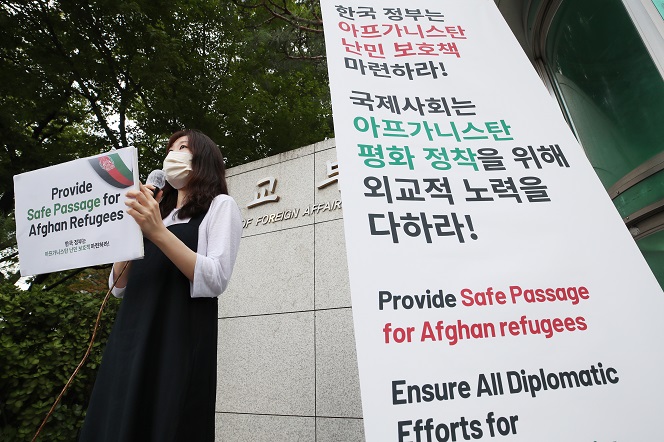 This Aug. 20, 2021, file photo shows Kim Jin, a lawyer for public interest law center Duroo, calling upon the government to provide safe passage for Afghan refugees during a press conference held in front of the foreign ministry building in central Seoul. (Yonhap)

SEOUL, Aug. 23 (Korea Bizwire) — A heated debate is brewing in South Korea over whether the country has to accept Afghans fleeing the Taliban takeover amid a report the United States is considering using its military bases in the country and others to house Afghan evacuees.

Since the Taliban took over Kabul earlier this month, some progressive politicians here have openly expressed support for taking in Afghan refugees.

“As the first Asian country that legislated the Refugee Act, the Republic of Korea has a role to play,” Rep. Jang Hye-yeong of the minor progressive Justice Party, wrote on Facebook.

“We have to work to pave the way for international solidarity by accepting at least families with pregnant women and children.”

Kang Min-jin, the head of the youth wing of the party, pointed out the need for measures to protect illegal Afghan immigrants.

“We cannot send undocumented Afghans back to their home country occupied by the Taliban,” Kang said. She called for a suspension of repatriation, extension of stay and recognition of refugee status for Afghans in South Korea.

Over 100 local civic groups, including the People’s Solidarity for Participatory Democracy, also issued a joint statement last week, calling on the government to come up with measures to protect Afghans who have worked for South Korea’s Provincial Reconstruction Team and other organizations and their families.

The civic groups claimed Seoul should take responsibility as a country that dispatched troops and construction workers in support of the U.S. war in Afghanistan. 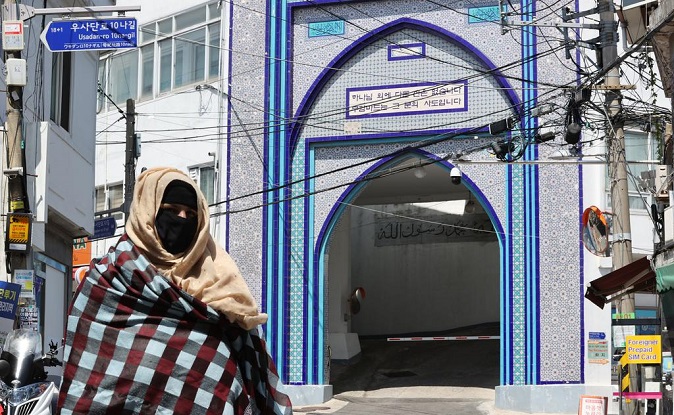 A Muslim woman walks on a deserted street in front of Seoul Central Masjid, the first mosque in South Korea, on Aug. 19, 2021, following reports that the Afghan capital of Kabul has been taken over by the Taliban. (Yonhap)

But some people are raising objection, citing safety, economic and other concerns.

They are becoming vocal, especially after The Wall Street Journal reported over the weekend the Pentagon is looking at American bases in South Korea, Japan, Germany and others as the housing sites for Afghan evacuees, with existing sites in Qatar and elsewhere filling up quickly.

“Afghan evacuees entering Korea can include Islamic extremists,” an online comment on the article said. Others raised concerns about possible crimes by migrants and argued the country does not have economic room to take them in.

The ethnically-homogenous country is known for its reluctance to accept asylum-seekers. It refused to grant refugee status to hundreds of Yemenis who arrived in the southern resort island of Jeju in 2018.

“Evacuees should go to Muslim countries neighboring Afghanistan. They have no reason to come all the way to South Korea,” Park Seong-je, a lawyer, said.

“We can provide financial aid through the office of the United Nations High Commissioner for Refugees or human resources and material help when a refugee camp is created near Afghanistan,” said Park who objected granting refugee status to the Yemenis in 2018.

Kim Jin, another lawyer, refuted such concerns. “The crime rate among the foreign population in South Korea is lower than that of Korean citizens, and there are many Afghans with academic and economic achievements living here,” Kim said.