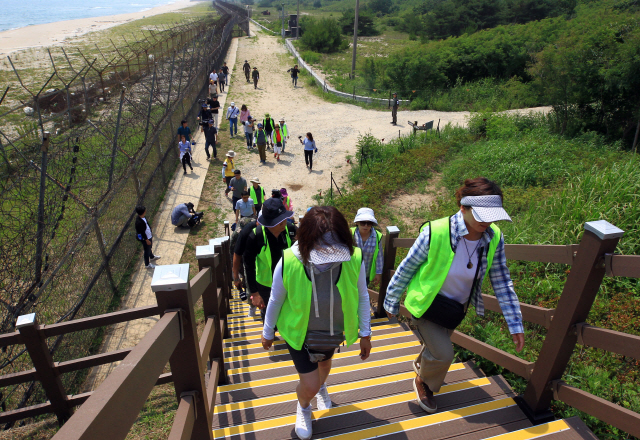 Tourists walk along a trail adjacent to the Demilitarized Zone (DMZ), named the DMZ Peace Trail, in the northeastern border county of Goseong June 26, 2019, nearly two months after its opening. (Yonhap)

SEOUL, Aug. 9 (Korea Bizwire) — The third and last hiking trail along the Demilitarized Zone (DMZ) separating the two Koreas will open to the public this week, the unification ministry said Friday.

The western section of the DMZ trail in Paju, some 30 kilometers northwest of Seoul, will be accessible to the public under the DMZ Peace Trail program starting Friday.

The tour project is part of Seoul’s efforts to allow visitors to experience inter-Korean peace and the security situation on the Korean Peninsula.

The first DMZ Peace Trail launched in the eastern coastal region of Goseong in April, followed by the second one in the central border town of Cherwon last month.

“(The launch of the new trails) will be an important opportunity for border areas to create new jobs and revive the regional economy,” Unification Minister Kim Yeon-chul said during a ceremony in Paju to mark the opening of the course.

“We will closely cooperate with local governments in the border areas to turn the DMZ into a peace hub that has history, ecology and culture all together,” he said.