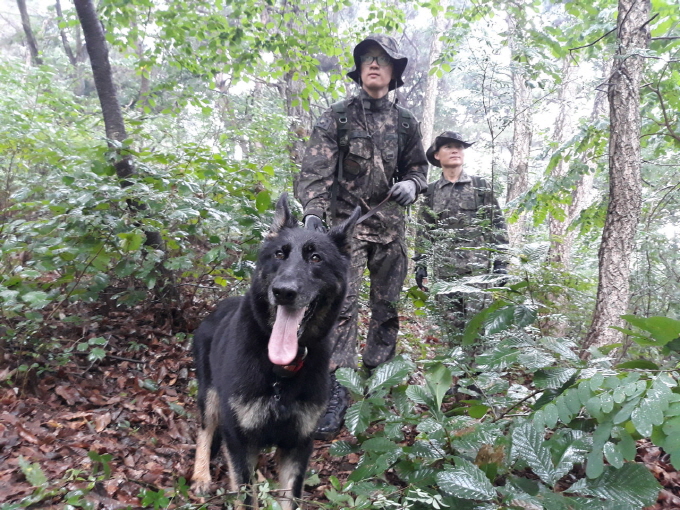 CHEONGJU, Aug. 5 (Korea Bizwire) – Cho Eunnuri, a 14-year-old girl who went missing in Cheongju for 10 days, was found in healthy condition in the mountains.

Cho was first found by ROK Army Sgt. Major Park Sang-jin and Dalgwan of the 32nd Homeland Defense Infantry Division in the mountains by Cheongju at 2:40 p.m. last Friday.

“Dalgwan made a rescue signal and found Cho near the rocks three meters away from our location,” said Park.

Cho was safely rescued and transferred to a hospital. She is in good condition and is expected to return home within a week.

Dalgwan is being praised as a national hero for his feat.

A former ‘military dog deserter’, he escaped while being transferred to a military working dog training facility in February 2014 but was re-captured the next day.

Dalgwan successfully managed to complete all of the military training courses and became a search and rescue dog, eventually finding the missing girl.

Due to military regulations, however, the dog may not be subject to a promotion or a medal, since military working dogs do not have any rank.

Instead, the he may receive a citation or other rewards.

“The military recognizes Dalgwan’s outstanding service in finding Cho, and is considering ways to reward him,” said an official from the ROK Army 32nd Homeland Defense Infantry Division.