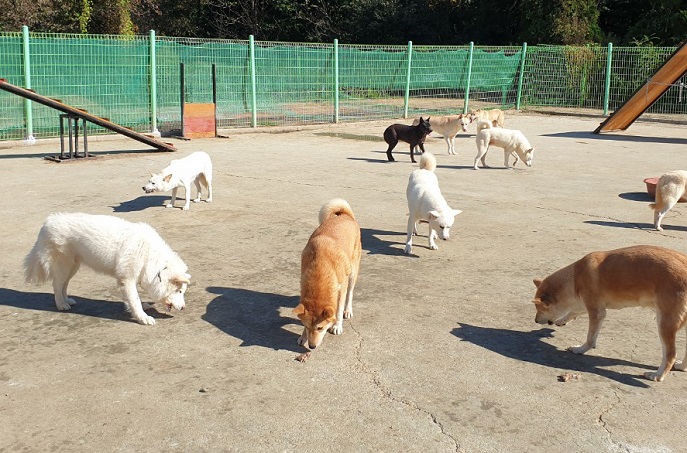 About 80 dogs rescued from the dog meat market last year were adopted overseas. (image: Alliance for Prevention of Cruelty to Animals)

BUSAN, Oct. 23 (Korea Bizwire) — All of the dogs rescued from the Gupo Dog Meat Market in the southern port city of Busan that was shut down last year have been successfully adopted overseas.

The dogs rescued from the market, which was shut down in July last year after 60 years of operations, were waiting for overseas adoption at an animal shelter in Gyeongju, North Gyeongsang Province.

Starting from early this year, the dogs were adopted by households in foreign countries, including the U.S. and Canada. The overseas adoption of these dogs was aided by an international animal protection organization.

While waiting for overseas adoption, some dogs died due to health issues, and several dogs gave birth.

After long discussions and consultations with animal protection organizations, the Busan Metropolitan Government and the district office of Busan’s Buk Ward agreed to shut down the Gupo Dog Meat Market.

The merchants therein accepted to shut down the market in return for life stabilization subsidies, while allowing the dogs to be adopted overseas.