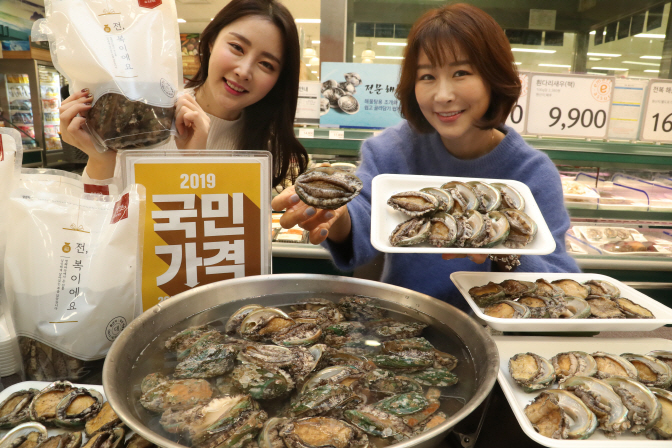 This year, abalone was selected as the first product for the discount policy. (image: E-Mart Inc.)

E-Mart announced on Thursday that it will select one product each from agricultural, fishery, and livestock products every first and third week of the month to discount by 40 to 50 percent for a one-week period.

E-Mart has been minimizing distribution margins since the second half of 2018 as well as engaging in early contracts to maximize inventory to prepare for the new initiative.

This year, abalone was selected as the first product for the discount policy.

Small packages of abalone, if paid for using an affiliated credit card, can be purchased for around 90 cents, which is 50 percent cheaper than the original price. One customer will be able to buy no more than 10 of these packages.

Medium or large packages of abalone will also be subject to a 40 to 50 percent discount, as well as a 40 percent discount for pork belly and chuck roll if purchased with an affiliated card.

Alchanran, a package of 30 eggs, can be purchased at the lowest price that Emart has ever provided in the past year.

E-Mart also plans to select 10 products each month from household necessities and processed food to showcase at special prices.

E-Mart and E-Mart Traders plan to launch a so-called e-T project where bestselling products at Emart Traders will also be sold at E-Mart. They also plan to engage in joint development of new products.

For January and February, air fryers, jelly straws, wireless vacuum cleaners, and other popular Trader’s products will also be available at E-Mart.

E-Mart and E-Mart Traders plan to release jointly-developed products in March, as they continue to develop synergistic strategies to maximize offline competitiveness.