Not only is eating more fish a healthy dietary option, it has also been found to reduce the risk of depression. (Image: Yonhap)

SEOUL, Feb. 5 (Korea Bizwire) — Not only is eating more fish a healthy dietary option, it has also been found to reduce the risk of depression.

A South Korean research team at Kyung Hee University discovered that individuals who consumed fish at least four times a week were 48 percent less likely to fall victim to depression than those who ate fish less than once a week. A report of the findings was published in a recent issue of the European Journal of Clinical Nutrition.

The researchers arrived at their conclusions by analyzing the records of 9,183 adults between the ages of 19 to 64 who participated in the annual National Health and Nutrition Examination Surveys conducted from 2013 through 2015.

The correlation between fish consumption and risk of depression was stronger for women (5,584 of 9,183 were women); eating fish less than once a week was linked to a 56 percent higher risk of depression compared to four times a week.

These findings were corroborated by studies undertaken by foreign research teams.

In Japan, research found that university students who ate fish nearly every day were 35 percent less likely to suffer from depression than those whose fish consumption was almost nonexistent. In Singapore, a similar study (55-year-old and older individuals who ate fish at least three times a week in contrast to those who did not) found fish consumption boosted resistance to depression by 40 percent. 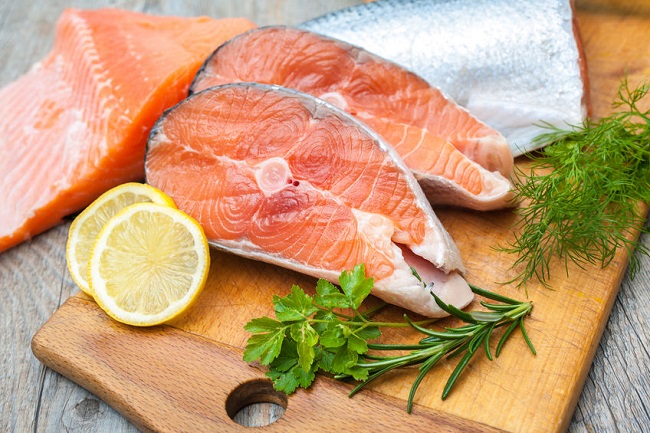 Researchers have pointed to the omega-3 fatty acids DHA and EPA in fish as playing a key role in contributing to mental health. (Image: Korea Bizwire)

Researchers have pointed to the omega-3 fatty acids DHA and EPA in fish as playing a key role in contributing to mental health.

A previous study led by Dr. Sarah Conklin in the U.S. revealed that individuals who consume higher levels of omega-3 fatty acids have greater amounts of grey matter in the area of the brain that regulates emotions. Conklin’s team have hypothesized that the grey matter provides a positive effect on the brain’s emotion regulation center.

With a separate study by the Seoul National University medical school finding that a diet heavy in the consumption of meat and processed foods increases the chances of depression (compared to a diet primarily composed of vegetables, fruits and beans), research is continuing to shed light on the link between food and mental health.