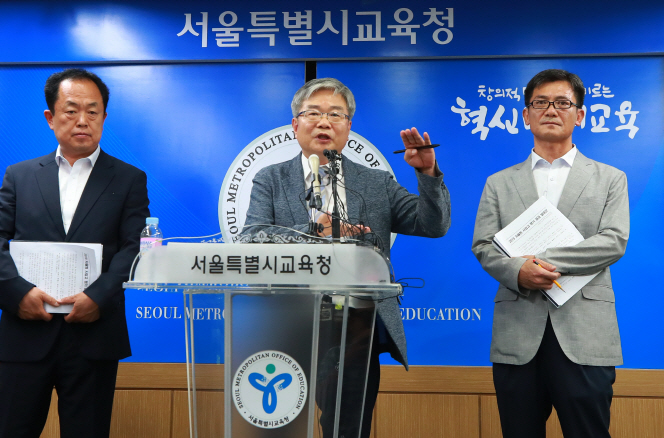 Park Gun-ho (C), chief of the educational policy bureau at the Seoul Metropolitan Office of Education, attends a press conference at the office in Seoul on July 9, 2019, to announce the results of evaluations for 13 autonomous private high schools in the capital. (Yonhap)

SEOUL, Jul. 9 (Korea Bizwire) — The Seoul education office decided Tuesday to cancel licenses for eight out of 13 “autonomous private high schools” in Seoul, as the education authorities and the government push for scrapping the privileged category of schools and bringing equality to public education.

Currently 42 autonomous private high schools are up and running across the country, and 24 schools, including the 13 in the capital, were undergoing evaluations this year.

Out of the eight schools that failed the test, the five comprising Kyunghee, Paichai, Sewha, Choongang and Ewha Womans University high schools were able to keep their status in 2014 after the education ministry under the then-conservative administration overruled a decision by the Seoul education office to remove them from the system.

Soongmoon and Shinil high schools were put back into the system in a 2016 reappraisal of such schools.

The cancellation of the licenses, for which the education office needs to get approval from the education minister, means they are to lose their special status that has guaranteed far greater autonomy in admissions, financing and curriculum than regular establishments and must turn themselves into regular high schools.

Tuesday’s decision by the Seoul education office brought to 11 the number of elite schools that have lost the autonomous private high school status, albeit pending a final decision to be made by Education Minister Yoo Eun-hye.

Chances are not high that the education minister will disagree with the local education authorities’ decisions, given that President Moon Jae-in promised to scrap the privileged category of schools during his election campaign in 2017 and that the cancellation of the elite schools’ licenses are one of the Moon government’s top educational policy priorities. 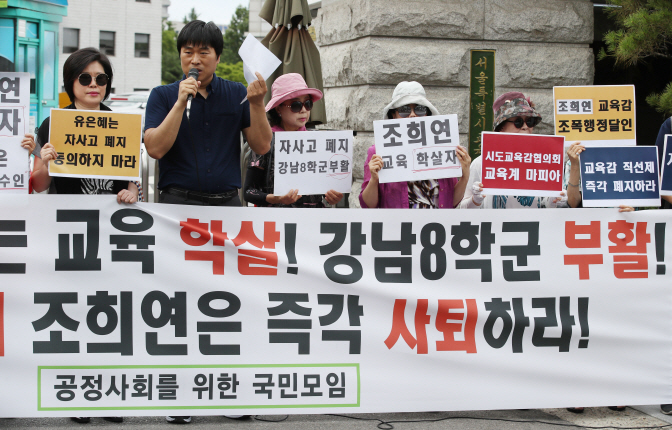 Members of a civic group rally in front of the Seoul Metropolitan Office of Education on July 9, 2019, demanding the office cancel its decision to deprive autonomous private high schools of their status. (Yonhap)

Critics say the operation of such elite high schools could deepen inequality, stratifying schools and undermining efforts to improve the quality of overall education.

A coalition of autonomous private high schools in Seoul issued a statement over the announcement of the results, claiming that “the education office has patched together an evaluation against us” and vowing to seek a public audit over the entire process of the evaluation and file a lawsuit against the office.

In the statement, the coalition of bodies involving heads of the schools, their students’ parents and alumni and civic groups supporting them said the evaluation, which lacks validity and reliability, should be null and void as it is anti-educational, above the law and unfair.

Progressive educational bodies that have called for the complete abolishment of the system showed discontent over only eight schools being displaced from the system, demanding the educational authorities implement the promise to scrap the system and conduct a law revision aimed at canceling licenses for autonomous private high schools collectively.

The Korean Teachers and Education Workers Union, a progressive umbrella union of teachers, said in a statement, “The Seoul education office gave artificial respiration by performing a poor evaluation to extend the life of autonomous private high schools.”

The union asked Seoul superintendent Cho Hee-yon, who has a long history of campaigning against the elite schools, whether the results of the evaluation conform to what he has said — “The zeitgeist demands the cancellation of autonomous private high schools.”

The Korean Federation of Teachers’ Associations, the nation’s largest teachers’ union, issued a statement regarding the announcement, saying the controversy over autonomous private high schools originates from the swaying of the entire high school system based on ideological tendencies of the government and education chiefs.

“The controversy over the autonomous private high schools cannot but persist if the direction of the entire high school system is influenced by a particular political ideology and schools are made or closed due to a change in the government and education chiefs,” the union said.