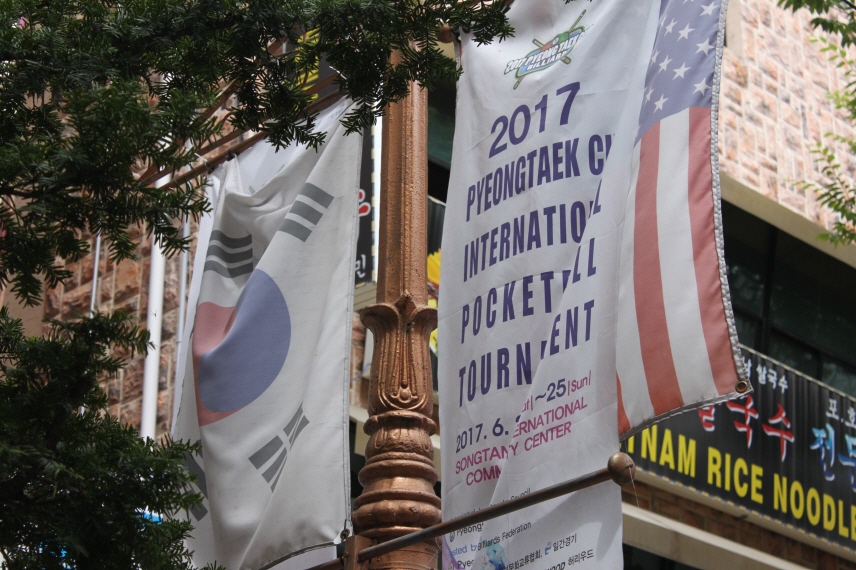 The national flags of South Korea and the United States hang on a pole on the downtown street of the Pyeongtaek International Central Market. (image: Yonhap)

If you are fed up with hanging around Itaewon in Seoul, it can be an alternative as it’s handy for those living in the capital.

Far smaller and calmer than the ever-bustling Itaewon district, but rustic and filled with exotic charm, this community is located at Pyeongtaek International Central Market, less than a 10-minute walk from Songtan Station connected to Seoul’s subway.

It houses more than 240 stores including restaurants, gift shops and tailor shops for foreigners.

In particular, pedestrian-only Shinjang Mall street, which starts from the main entrance of Osan Air Base or K-55 and stretches several hundred meters, is packed with stores, bars and restaurants catering to international diets including Korean, American, Turkish, Vietnamese, Indian and Peruvian. Almost all signs are in English.

“I like it. We’ve been here for just two months. But I don’t think there’s any language barrier as shop owners speak English,” said John Bartoli, a solider at the 7th Air Force stationed at the Osan base. He would not give his rank.

He was shopping after work with his wife and five children, although he struggled to find a stationary store for notebooks.

Just as Itaewon adjacent to the U.S. Army Garrison in Yongsan, Song Francisco in the administrative jurisdiction of Pyeongtaek was born near K-55 after the 1950-53 Korean War. The two are among the major U.S. military compounds in South Korea, which hosts around 28,500 American service members for now.

The district and the vicinity were designated Songtan Special Tourist Zone in 1997. Some American soldiers nicknamed it after San Francisco.

“It started as a community for American soldiers, but it’s becoming a multicultural community,” Brian Ohara, a U.S.-born pastor at the Mission Baptist Church close to the main street, said.

It’s still frequented mostly by U.S. service members and their families but there’s a growing number of Korean, other Asian and even African residents and visitors, he added.

While Itaewon has a lot of big franchise stores and restaurants, such as On the Border, the Songtan district features largely smaller local ones, according to Ohara who has lived in Korea for eight years.

Certainly, it’s about the number of customers and their purchasing power. But it’s partly attributable to the popularity of local brands.

Among hamburger franchises, there’s only one McDonald’s outlet surviving in the district, still an underdog in competition with the top-three non-franchise burger joints — Miss Jin’s Burger, Song’s Burger and Rocky’s Burger. Waiting in a long line is usual for those who want local burgers.

Another signature food here is budae-jjigae, which literally means “army base stew” in Korean and is essentially sausage and ham stew. The food originates from when Koreans dwelling around U.S. army bases made use of surplus foods from bases when food was scarce after the Korean War.

Among the most popular restaurants is Kim’s House Budae-jjigae long promoted by word of mouth. 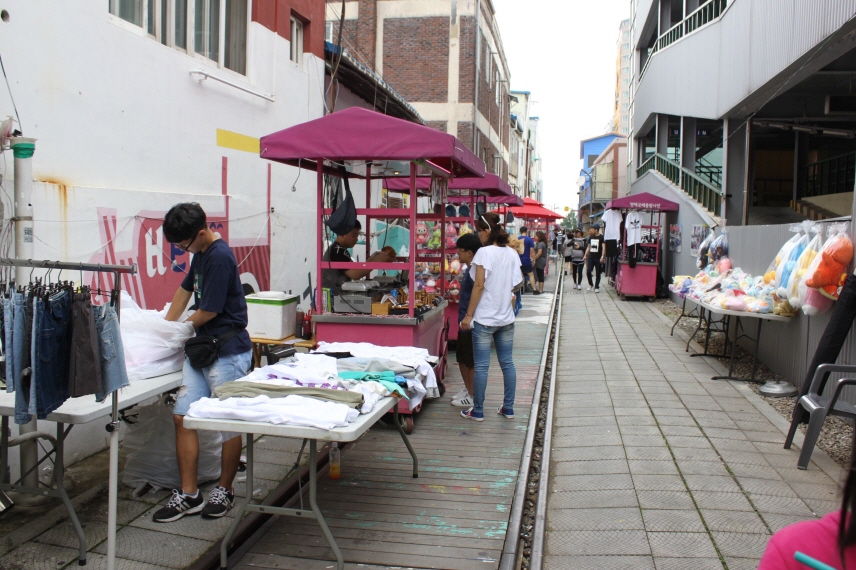 Pink-colored carts in business on the railroad at the Pyeongtaek International Central Market. (image: Yonhap)

Another hot spot for couples and visiting Korean families is a narrow alley on a railroad track near the dead end of the “downtown” street. It’s famous for its interesting murals.

The railway is used once a week to transport oil to K-55. On weekends, a special market opens in the alley with a dozen pink food and souvenir carts.

“I learned about this area from Internet blogs, think it’s worth coming here to see many foreigners and feel an extraordinary mood just as Itaewon,” Park Seung-chul, an office worker in Sejong City, said, walking down the street along with his girlfriend. “It seems like a mix of tradition and exotic scene and culture, I mean less commercialized.”

He said he would recommend this place to his friends but he hesitated to answer when asked about whether he is willing to come again himself. “I think it would be better to have more cafes and things to see and do here,” he said.

Some American soldiers agreed that small may be beautiful but is gets boring easily.

“It’s not bad for taking a walk in good weather like today but not for shopping. I try to go to Itaewon, Myeongdong or Gangnam (in Seoul),” said Kaila Moffett who belongs to the 7th Air Force.

The relocation of American soldiers in Yongsan and other regions to Camp Humphreys, a refurbished base just 20km west of K-55, is likely to serve as both an opportunity and a challenge for this community.

“Those based in the Humphreys would come over here. People here may also go there for eating or drinking,” Moffett said.

Shop owners in the Songtan district are confident that their market will draw more visitors, both foreigners and Koreans. As part of the efforts, they plan to host the 14th Korean-American Cultural Friendship Festival this weekend.

“Here in the market, you can feel like visiting a foreign country without taking a plane,” said Song Doo-hak, head of the merchants’ association who runs Song’s Burger.

“Different from other South Korean traditional markets, the Pyeongtaek International Central Market has unique charm with a multinational culture. We will continue efforts for a lively market beloved by many people.”