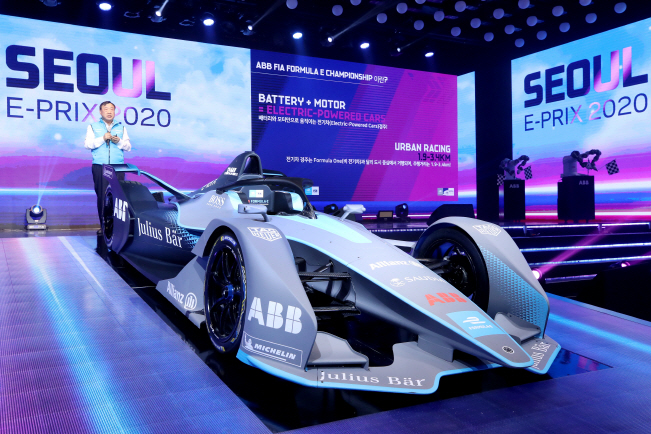 Lee Hee-beom, chairman of Seoul E-Prix 2020, delivers a briefing on the 2019/2020 ABB FIA Formula E Championship that will be held in Seoul next year at a press conference at Shilla Hotel in central Seoul on on July 2, 2019. (Yonhap)

The 2019/2020 ABB FIA Formula E Championship will take place at Jamsil Stadium and on neighboring streets in eastern Seoul on May 3, 2020, Formula E Korea said in a statement.

“I’m so excited to be coming to Korea and the streets of Seoul for the first time with the ABB FIA Formula E Championship next season. Formula E will be showcasing speed and performance at the former Olympic venue, using a unique track with a spectacular stadium section,” Alejandro Agag, founder & CEO of Formula E Operations Ltd, said in a press conference held in Seoul.

Asia is in the ascendancy in terms of global electric vehicle sales and technological development, so adding another race in the region shows a shared commitment to clean mobility.

Season six is shaping up to be special and more so with the addition of Seoul and its iconic skyline, he said.

Electric street racing is mainly aimed at promoting all-electric vehicles as a future growth driver for the country and reducing carbon dioxide, which is a main contributor to global warming, Lee Hee-beom, chairman of Seoul E-Prix 2020, said in a press conference.

As the “global holiday week” falls between April 25 and May 5 next year in China and Japan, the fixed date for the event will help attract some Chinese and Japanese tourists to Korea, the former energy minister said.

The world’s electric car market is expected to grow an average of 42 percent each year by 2025 amid rising demand for emission-free vehicles, the statement said.

South Korea, Japan and China are vying for a bigger share of the car battery market as they supply a combined 84 percent of them in global markets, it said.

The Formula E championship began in Beijing in 2014, and the series’ sixth year is set to open in Seoul in 2020.

Swiss-based power transmission and industrial automation company ABB has been the title sponsor of the event since 2018 under a seven-year sponsorship contract.

“South Korea has a good environment for digitalization because of positive factors such as strong IT capabilities, the world’s first 5G service, ambitious renewable energy initiatives and urbanization — 10 million people (about 20 percent of the national population) lives in Seoul,” SweeSeng Lee, managing director of ABB Korea, said.