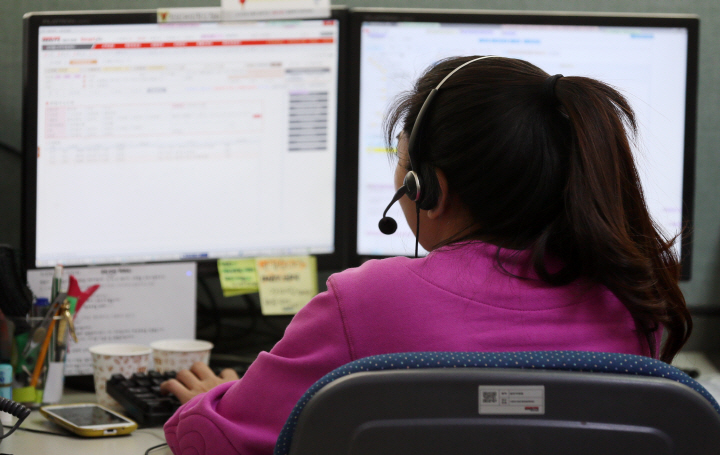 The laborers themselves believe that using the concept of a family to describe them is inappropriate. (image: Yonhap)

SEOUL, Aug. 26 (Korea Bizwire) — Experts are raising concerns that the concept of a family is being overly exploited as a ‘shield’ to protect emotional laborers.

The laborers themselves believe that using the concept of a family to describe them is inappropriate.

Last October, the Ministry of Employment and Labor distributed seven ringtones that can be used when contacting emotional laborers, four of which identified them as part of a ‘family’.

The expressions included ‘my mother,’ ‘a daughter, son, mother, and father,’ ‘my family’ and others that hinted at the emotional laborers being a ‘family member’.

“Direct expressions are okay, too, but there have been many institutions that preferred to use indirect slogans, so we decided to come up with a number of family-related ringtones for free use,” said a government official.

Open-source ringtones created by GS Caltex Corp. that are currently in use among 19 businesses and public agencies also include family-related expressions, such as ‘my dearest mother,’ and ‘my lovely daughter’ to make the callers feel that emotional laborers are part of their family.

The laborers, however, argue that family-related slogans are far from fundamentally resolving the difficulties they are facing.

“The laborers call for a stronger warning that verbal abuse or violence can be punished by law,” said Lee Seong-jeong, executive commissioner at the National Network for Emotional Labor.

“But too much emphasis on punitive measures may undermine the market, so they are seeing it as part of the process towards resolution.”

The Occupational Safety and Health Research Institute developed guidelines in 2015 that call on the need to develop an objective service standard to maintain an equal relationship between emotional laborers and consumers.

It also calls on businesses to notify the consumer on objective standards related to emotional labor to prevent them from making excessive demands.

“Family-related expressions can be understood as a pressure to take in all verbal abuse from the customers. It may infringe upon their rights as laborers,” said Prof. Choi Hang-sub from Kookmin University.

“We expect, however, that family-oriented expressions will soon drop since an increasing number of single-person households are slowly replacing the meaning of a family.”