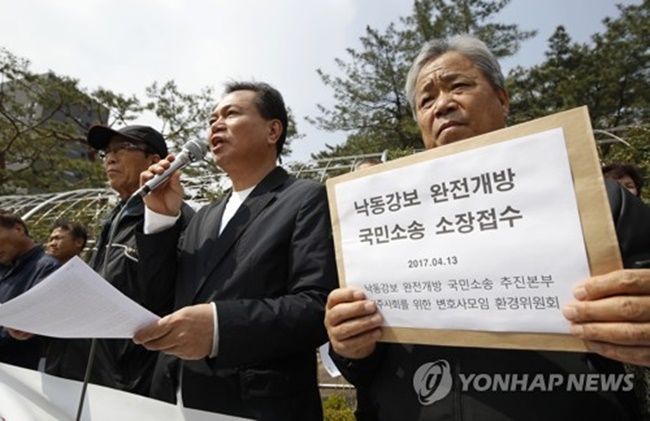 SEOUL, April 14 (Korea Bizwire) – A group of environmental activists and residents near the Nakdong River has filed a class-action suit against the government over the Four Major Rivers Restoration Project initiated by former President Lee Myung-bak, which led to water contamination.

With more than 300 people behind the pursuit of legal action including local residents, fishermen and farmers, environmental groups including the Nakdong River Network announced yesterday that they submitted a claim for damages to the Seoul Central District Court to hold accountable the government and the Ministry of Land, Infrastructure, and Transport (MOLIT) for the consequences of their ill-thought out policy that polluted the drinking water in the region.

Though not classified as a class action in strict legal terms, Lawyers for a Democratic Society, an organization that is handling the civil suit, argued, “Damages have resulted as people have consumed contaminated water containing harmful substances.”

“Despite being fully aware of the environmental consequences, the previous government forcibly went forward with the project in the Nakdong River area in such a short period of time. We are filing a damages claim over the mistakes made along the way,” the lawyers said.

“The recent deterioration of water quality in the Nakdong River can no longer be ignored. On behalf of all the lives affected by water contamination and to protect the right to live for local fishermen and farmers, we urge the government to open all reservoirs for better circulation of water as we go forward with the lawsuit,” the plaintiffs said.