SEOUL, June 13 (Korea Bizwire) – eSports, also known as pro-gaming, refers to a form of sports where the primary aspects of the sport are facilitated by electronic systems, namely videogames. The popularity of eSports is growing not just in Korea, but also internationally, to the point where global sports clubs are actively investing in the industry.

According to the Korea Creative Content Agency, the global eSports market was valued at approximately $612 million in 2015, with the Asian market leading the way with $374 million (61 percent of global market share).

Pro-gaming is still extremely popular in Korea. The market picked up momentum with the soaring popularity of Blizzard Entertainment’s Starcraft, and various corporations, including SK Telecom and CJ, have since invested in the industry and are currently operating professional sports clubs designated for eSports.

To meet increasing demand, the Seoul Metropolitan Government even built Korea’s largest eSports stadium, Seoul OGN eStadium, which was completed earlier this April. The new stadium features facilities for broadcast production and transmission, and has an auditorium that can host up to 758 people.

Korea even has dedicated eSports TV channels, such as OGN and SPOTV Games, that only broadcast videogame competitions and related content. 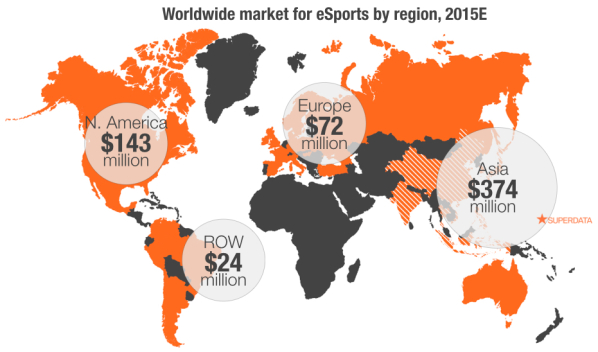 Media interest in Lee, who’s often referred to as the Messi of the gaming industry, has continued such that that even CNN wanted to interview the young prodigy.

Last week, on June 7, Valencia FC, a Spanish football club, revealed its plans to enter the eSports market. Chief marketing officer Peter Draper called it a ‘challenge that offers the opportunity to enter a growing market’, and showed his excitement at being one of the first to lead an industry that is fast gaining popularity across Europe.

“I expect the eSports market to grow both in terms of quality and quantity, if we can upgrade the existing market to more developed systems and infrastructure used by existing professional sports clubs,” said a pro-gaming industry official.