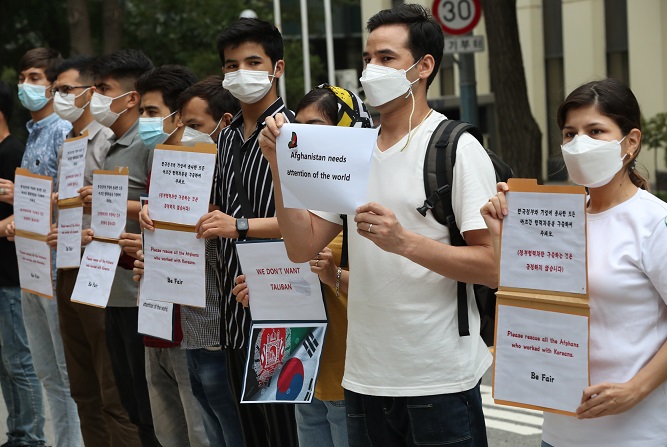 A group of Afghans living in South Korea holds a news conference in front of the foreign ministry in Seoul on Aug. 23, 2021, calling for the government to evacuate their families from the war-torn country. (Yonhap)

SEOUL, Aug. 26 (Korea Bizwire) — With the acceptance of refugees from Afghanistan rising as a new social issue in South Korea, experts are arguing that the country should modify the humanitarian stay permits that allow foreigners who do not qualify as refugees but are deemed to require protection to stay in the country.

A report published by the state-run Migration Research and Training Center on Wednesday showed that among 6,684 asylum seekers in South Korea last year, only 155 people who were issued humanitarian stay permits and 69 refugees were allowed to stay in the country.

Since 1994, the Ministry of Justice showed that there were a total of 2,409 foreigners who have been issued humanitarian stay permits, outmatching the number of refugees (1,119 people) by more than a factor of two.

Humanitarian stay permits are issued for those who do not qualify as refugees but who face danger such as torture and other kinds of inhumane treatment that could threaten their life or freedoms were they to return to their home country.

Among 484 asylum seekers from Yemen who entered South Korea via Jeju Island in 2018, 85.1 percent have received humanitarian stay permits. Only two of them acquired refugee status.

The research team argued that humanitarian stay permits should be improved to cater to the potential increase of asylum seekers in the future.

The report pointed out problems in the review process due to unclear standards over issuing humanitarian stay permits and the potential risk for the permits to be exploited as means to deny protection since it they are defined as a system of ‘approval,’ rather than a mandatory responsibility of the state to protect asylum seekers.