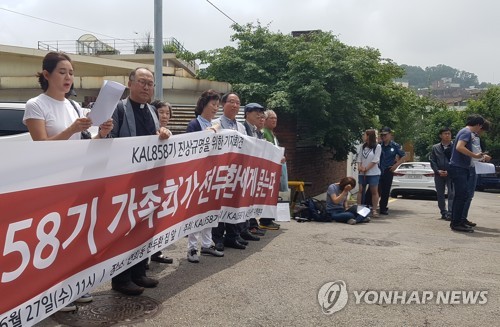 Family members of victims came together yesterday morning to hold a press conference in front of the former president’s home in Seoul’s Yeonhui-dong neighborhood, denouncing the former leader. (image: Yonhap)

SEOUL, Jun, 28 (Korea Bizwire) — Family members of Korean Air Flight 858 victims have demanded that the government investigate the truth behind the Korean Air aircraft explosion in 1987, claiming that the “main culprit for the incident is ex-President Chun Doo-hwan, not Kim Hyon-hui.”

Kim Hyon-hui was found to be the one responsible for the explosion.

Family members of victims came together yesterday morning to hold a press conference in front of the former president’s home in Seoul’s Yeonhui-dong neighborhood, denouncing the former leader.

“The lie cannot be covered up forever and the truth will unveil itself,” said protestors.

Flight 858 left Baghdad, Iraq on November 29, 1987 and was on its way to Seoul before disappearing as it flew over the Andaman Sea.

All 115 people on board, including the crew, disappeared without a single corpse or articles belonging to passengers ever found.

At the time, the now defunct Agency for National Security Planning, the nation’s key intelligence service, announced that the explosion was an act of terrorism by North Korea.

A day before the 13th presidential election was to be held on December 15, Kim Hyon-hui was arrested as the key suspect and terrorist. She was sentenced to death in 1990, only to be pardoned in the same year.

Although investigations by various administrations ruled that the explosion was North Korea’s doing, family members of victims have been calling for a new inquiry into the incident, citing a lack of evidence, 31 years after the plane disappeared.

They claim that Kim Hyon-hui was used by ex-President Chun to extend his military rule over the nation.

The victims’ family members question the fact that Chun and intelligence officers immediately determined the explosion to be an act of terrorism when there was no evidence at all resulting from the explosion.

Kim Ho-sun, a representative of the families, said that the incident was sensationalized through the press without the government having found a single corpse or items from the explosion.

“All of Kim Hyon-hui’s actions claimed by the intelligence agency were proven to be lies,” said the representative.

The families are expected to press charges against Chun for having published falsehoods in his memoir concerning the KAL Flight 858 explosion.