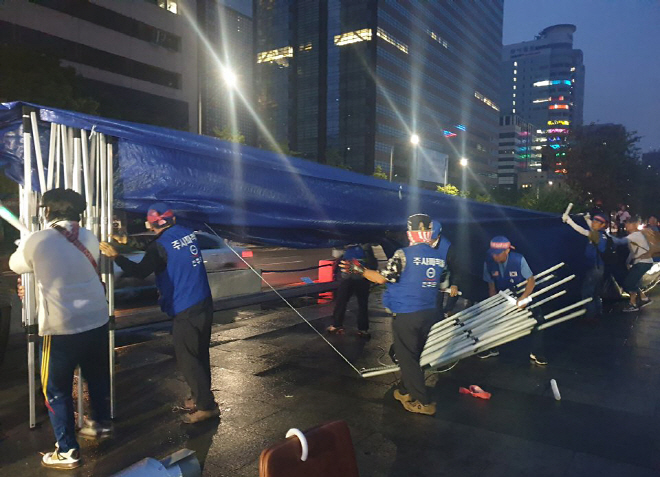 Members of the far-right opposition Our Republican Party remove their protest tents from Gwanghwamun Square in central Seoul on July 16, 2019. (Yonhap)

SEOUL, Jul. 16 (Korea Bizwire) — A minor ultra-right party took down its protest tents at a public square in central Seoul early Tuesday just before city officials arrived there to remove them.

The Our Republican Party, however, said it would return to Gwanghwamun Square soon to continue their campaign to press for a special probe into the deaths of five conservative protesters in 2017.

The government of the capital city warned it would use all physical, legal and administrative means to block their illegal occupation.

The party was established largely by loyalists of former President Park Geun-hye in July 2017 after she was ousted from office in March that year over a corruption scandal.

Gwanghwamun Square was the main venue of the candlelight protests against her that began in late 2016.

The party’s members began camping out on the symbolic square on May 10 without the city government’s authorization, demanding a special investigation into the deaths of five participants in street protests against Park’s impeachment in 2017.

They moved the tents to a nearby site on June 28 ahead of U.S. President Donald Trump’s visit to Seoul. They put up four tents again at the plaza on July 6.

On Tuesday the city government sent hundreds of personnel to demolish the tent city. But the protesters folded them up at 5 a.m. before the city workers arrived 20 minutes later.

They initially moved the tents to another place several hundred meters away but removed them at 6 a.m.

The party’s leader said the removal is only temporary and is intended to avoid the administrative action.

“The tents subject to the (execution of the administrative order) have disappeared. That is, we have neutralized its execution,” Rep. Cho Won-jin, co-head of the Our Republican Party, said.

“We will pitch eight tents at Gwanghwamun Square again soon.”

The city hall said it will never allow the party to continue the unlawful assembly. It set 70 workers to patrol the area, so as not to repeat its first failed attempt to break the demonstration up.

On June 25 city officials removed the tents, only to see them set up again five hours later.

“We will physically block their installation of tents. If physical conflicts occur in the process, they would constitute an obstruction of official duties and we will work together with police to prevent them,” Kang Maeng-hoon, chief of the city’s Urban Regeneration Office, said.

“If the tents are installed, we will strictly deal with them in accordance with the procedures and principles set by the law.”

Late last month, the city applied for an injunction to ban the party from occupying the location, claiming the act infringes on its interests. The court ruling is scheduled for Wednesday.

The metropolitan government has also requested that the party pay the cost of the June 25 eviction — 146 million won (US$123,833).

As for the Tuesday’s second raid, which was not actually executed, the city will file a damages suit, which may cost the far-right party hundreds of millions of won, Kang said.

The city will also impose a penalty, estimated to be 3.5 million won, on the party for its illegal occupation of the square since May 10.