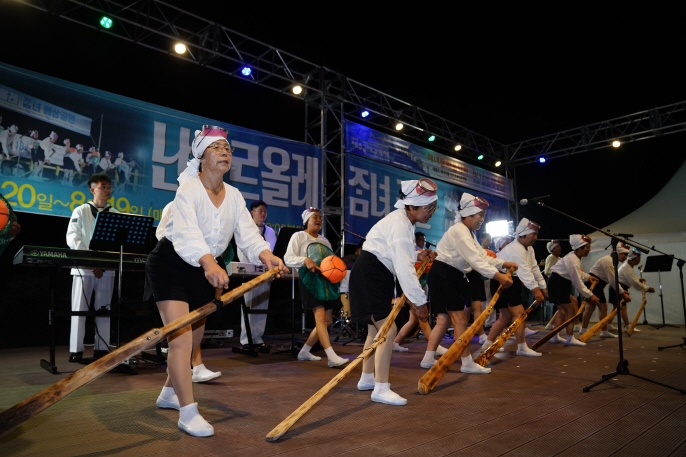 There are currently 40 haenyeo divers in Gosan-ri, 20 of whom are participants in a “haenyeo cultural performance team,” traveling in their spare time to raise public awareness of their traditions. (image: Festival Organizing Committee)

JEJU, Oct. 4 (Korea Bizwire) — Haenyeo, the women of Jeju who dive in search of seafood, are slated to put on cultural performances in Canada and Germany.

According to the organizing committee of the Jeju International Wind Ensemble Festival, the women divers of Gosan-ri, Hangyeong-meyon in Jeju will perform at the Kitchener–Waterloo Oktoberfest to be held in Ontario, Canada on October 9.

The women will perform “Seoujesori” and “Ieodosana,” both traditional songs of Jeju, with the Northstar-Optimist Alumni Band.

The female divers and the band performed together at the Jeju International Wind Ensemble Festival. After the performance, the Jeju women have been invited to march in a parade on October 10.

On a separate occasion, the female divers of Daepyeong-ri, Andeok-myeon in Seogwipo-si were invited to perform “Ieodosana” and an additional song in Loelei, Germany with the Phoenix Foundation Jazz Band, a youth jazz orchestra consisting of students from the Rheinland-Pfalz region of Germany.

There are currently 40 haenyeo divers in Gosan-ri, 20 of whom are participants in a “haenyeo cultural performance team,” traveling in their spare time to raise public awareness of their traditions.

Meanwhile, the female divers of Daepyeong-ri created their own performance team in 2009 in an effort to promote the “Song of Haenyeo,” the top Intangible Cultural Property designated by the province.

The overseas performances, sponsored by the local government of Jeju in association with the Jeju Free International City Development Center, aim to promote the culture of these female divers, having been designated as an Intangible cultural heritage by the United Nations Educational, Scientific and Cultural Organization (UNESCO) in 2016.