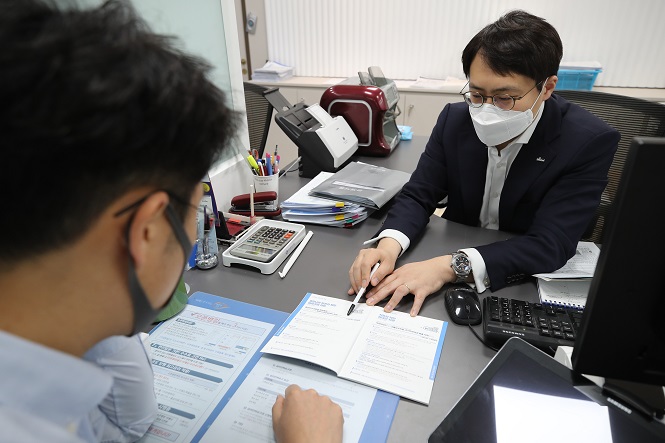 In the photo, taken April 6, 2020, a customer (L) holds an interview with a bank official in Seoul for a special low-interest loan designed for local businesses hit by the new coronavirus outbreak. (Yonhap)

According to the report from the Korea Economic Research Institute (KERI), the outstanding debt owed by 623 listed firms here came to 386.7 trillion won (US$318.6 billion) as of end-March, up 20 trillion won from three months earlier.

The report is based on the analysis of financial statements from the firms that have released their first quarter statements.

KERI noted the outstanding debt of the 623 firms had increased by about 5 trillion won every three months prior to the first three months of this year.

“The firms’ cash flows weakened, while their debt dependency increased due to unexpected shocks from the COVID-19 pandemic and low global oil prices,” the report said.

It added the airline, retail, tourism and shipbuilding industries had greater cash outflows than inflows in the January-March period, while the amount of cash inflows for the textile industry plunged to one-tenth of that from the same period last year.

The average debt dependency rate of the 624 listed firms came to 22.5 percent as of end-March, compared with 21.6 percent three months earlier, the report said.