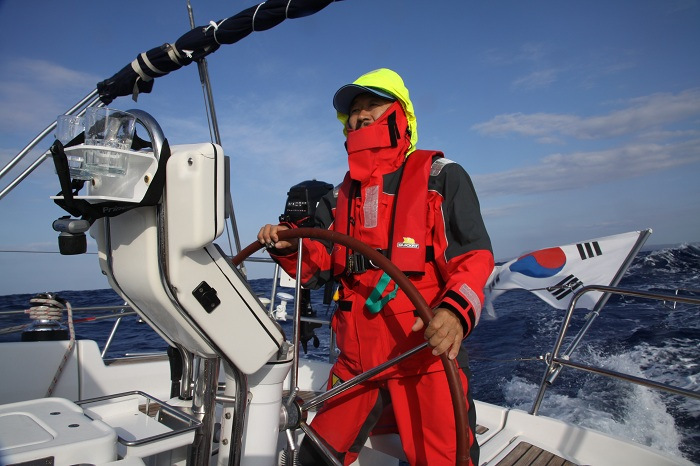 Kim passed by the southernmost tip of South America on February 2, 107 days after his “Hope of Sailing” expedition launched from from Waemok port in Dangjin on October 18. (image: Dangjin city)

SEOUL, Feb. 6 (Korea Bizwire) – Kim Seung-jin, who set out on a worldwide sailing adventure last year with no physical aid, without making landfall at any port and using only the power of the wind, just passed through Cape Horn, sometimes known as the “Mt. Everest of the Sea.”

According to officials from Dangjin city, Kim passed by the southernmost tip of South America on February 2, 107 days after his “Hope of Sailing” expedition launched from Waemok port in Dangjin on October 18. The area around Cape Horn is notorious for being a sailors’ graveyard, as its waters are particularly hazardous, owing to strong winds, large waves, strong currents and icebergs.

On the day when the Arapani, Captain Kim’s 13-meter long yacht, passed by the cape, wind speeds measured 36 knots on average (with a maximum of 50 knots), with waves between 5 and 7 meters tall. It was the most critical stage of Kim’s trip.

After overcoming the challenging seas, Captain Kim is sailing forward to the Atlantic Ocean. He is expected to pass by the Cape of Good Hope in March, and to return to Waemok port in May this year.

Kim undertook his expedition to give hope to Koreans, and heal pain felt from the tragedy of the sinking of the Sewol Ferry. The voyage is sponsored by the Ministry of Ocean and Fisheries, Dangjin city and the Korean Cruiser Yacht Association. Before setting sail, Kim said, “I’ll successfully finish the journey and send a message of hope to Koreans.”

The first person to perform a solo non-stop circumnavigation of the world was Robin Knox-Johnston, an English sailor, in 1969. Japanese sailor Horie Kenichi succeeded in sailing around the world twice, in 1974 and 2005. Australia’s Jessica Watson is the youngest sailor to have successfully completed the trip, finishing at the age of 16 in 2010.