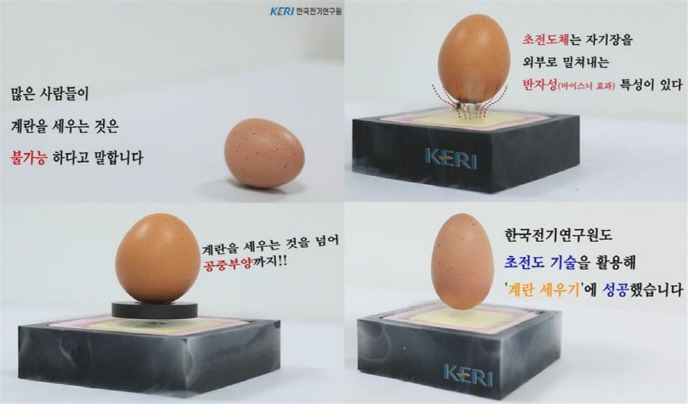 The KERI team glued a magnet under an egg and placed it on a superconductor cooled to minus 196 degrees Celsius using liquid nitrogen. (image: Korea Electrotechnology Research Institute)

The research institute in Changwon, South Gyeongsang Province said Tuesday that it used superconducting technology to make eggs float and posted videos of the experiment on Facebook, YouTube, Instagram, and its official blog.

Superconductivity is a phenomenon that occurs when a metal and other materials are cooled below a certain temperature. They then suddenly have electrical resistance and transmit unlimited electric current.

Superconductors or materials in superconducting state have characteristics that push magnetic fields outwards, also known as the negative effect. Even a magnet floats near a superconductor.

The KERI team glued a magnet under an egg and placed it on a superconductor cooled to minus 196 degrees Celsius using liquid nitrogen. As a result, the egg lifted and floated in the air.

“Columbus thought outside the box, broke one end of an egg slightly and lifted up an egg,” KERI officials explained.

“We uploaded a video of floating eggs using superconducting technology to let people know the importance of ideas and innovation,“ the official added.

In addition, KERI posted on social media describing how to extend the life of cell phone batteries and how to generate electricity using the principle of electric eels, as well as interesting scientific knowledge, to publicize its research results.

“Why Are Electrical Outlets Different from Country to Country,” which was posted during the holiday season this year, has become popular with more than 200,000 online views.