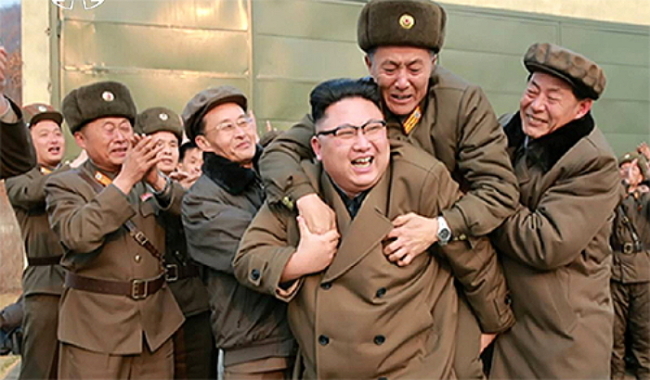 Since taking office, the media coverage of its leader celebrating the success of missile tests with defense officials in an exaggerated manner in North Korea has noticeably increased, compared to Kim’s precedent and father, Kim Jong-il. (Yonhap)

SEOUL, March 21 (Korea Bizwire) – North Korean leader Kim Jong-un, who is widely known for his infamously barbaric and brutal ways, is attracting attention after being seen showing unusually friendly body language and behavior around his subordinates through state-owned media.

Pictures of Kim Jong-un emerged soon after North Korea’s successful test launch of ballistic missiles last Saturday in which he was seen holding hands with and giving piggyback rides to defense and national security officials near the launch site.

His softened, yet rather contrived behavior comes as a surprise coming from someone who made international headlines for possibly ordering the assassination of his half-brother Kim Jong-nam with a substance classified as a weapon of mass destruction in a Malaysian airport last month.

Kim also ordered the public execution of his uncle, Jang Song-thaek, who he saw as a political threat back in 2013.

Reports also suggest that the infamous North Korea leader purged a great number of officials from his government.

Critics say the change of tone is a politically calculated move to bolster support for the country’s National Defense Science initiatives and ramp up its pro-weapons of mass destruction message to the rest of the world, which mostly shares a highly unfavorable view of North Korea’s nuclear armament.

Since taking office, the media coverage of its leader celebrating the success of missile tests with defense officials in an exaggerated manner in North Korea has noticeably increased, compared to Kim’s precedent and father, Kim Jong-il.

Last week, Kim paid a rare visit to a missile assembly site, where he stayed with scientists and technicians from the Academy of the National Defense Science (ANDS) to direct the test launch of ballistic missiles.

Kim was seen smoking along with other military and government officials. It’s a rare sight for officials to be smoking in the presence of the North Korean leader, when the second most powerful person after Kim, deputy Hwang Byeong Seo, has to talk with his mouth covered and down on his knees when speaking to Kim.

Professor Nam Seong Wook from the department of Korean Unification, Diplomacy and Security at Korea University, says, “His blatant favoritism towards scientists such as giving them a piggyback helps show his support and trust in military science while keeping the old power structure on their toes.”