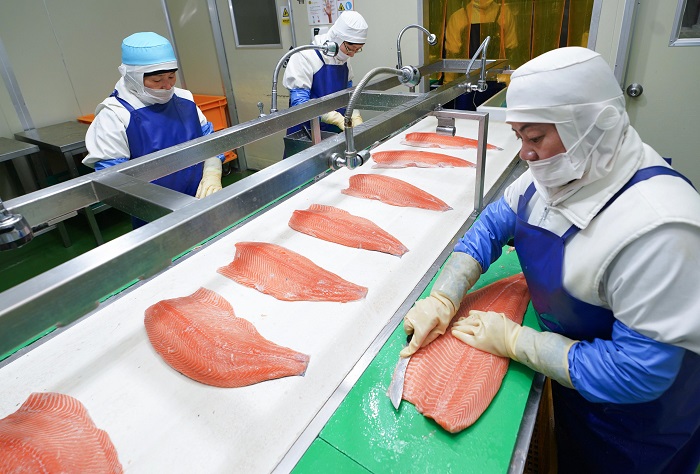 SEOUL, Feb. 25 (Korea Bizwire) — Food companies are coming up with variety of recipes, including salmon and tuna, for home meal replacement (HMR) products.

In 2017, South Koreans consumed 58.4 kilograms of fishery products per person, surpassing Japan to become the largest consumers in the world.

According to the Norwegian Seafood Council, the favorite fish of South Koreans is mackerel, followed by salmon. South Korea imports most of the salmon consumed in the country.

Salmon has captivated the South Korean taste, and food companies are rushing to expand imports.

“The salmon market in South Korea largely began in the 1990s when westernization and well-being trends led consumers to eat salmon at Japanese restaurants or other high-end vendors,” said a food company official.

“It was in the 2000s when salmon began to expand throughout family restaurants. The demand for fishery goods outside of the Pacific Ocean soared after the nuclear accident at Fukushima, Japan, leading to the rise in imports.”

Salmon is popular even among South Koreans in their 20s and 30s, the majority of whom are not normally fond of seafood, serving as the ‘key’ for food companies to unlock seafood consumption among younger generations.

South Korean food companies are rushing to secure their line of salmon supply.

Dongwon Industries Co., one of South Korea’s largest seafood companies, has been strengthening its purchasing power over the salmon market by closely working with some of the largest salmon suppliers overseas, and building a processing factory in Busan, where salmon is imported, for business-to-busines (B2B) and business-to-consumer (B2C) processing and production.

The company imported 7,000 tons of salmon last year, comprising as much as 19 percent of the entire salmon market.

“Dongwon Salmon, based on its long tradition and experience, is now gaining a natural advantage in the salmon market,” said Dongwon Industries.

“Thanks to the increase in salmon imports, our sales have soared by 35 percent, and we have seen a 40 percent increase in B2C sales.” 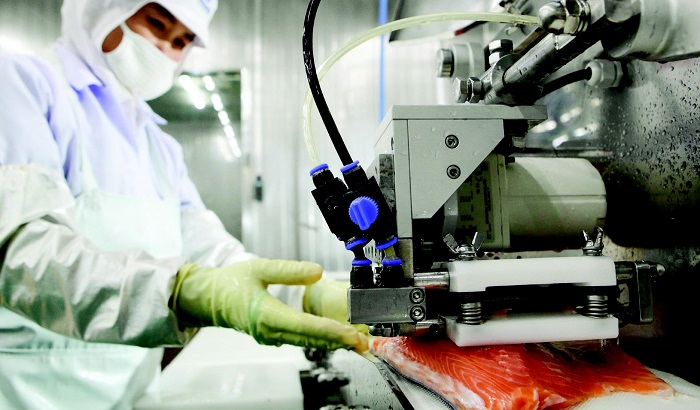 Shinsegae Food Inc. began importing salmon in 2010. It has also been expanding its imports of salmon each year, bringing in as much as 1,659 tons of salmon last year.

The company plans to reach 100 billion won (US$89.2 million) in sales by 2023 by concentrating on the salmon business.

Last year, the company introduced an automated cleansing and processing system at its factory in Icheon, Gyeonggi Province, to keep refrigerated salmon fresh.

It uses a slightly acid electrolyzed water to clean the salmon. The system has received Hazard Analysis and Critical Control Points (HACCP) certification.

“We now have 20 available processing methods to match a more diverse range of cuisines,” said Shinsegae Food. “We will go beyond last year’s 30 billion won in sales to reach 40 billion won this year.”

Shinsegae Food also plans to build additional processing facilities by 2021 to increase daily production of salmon goods from the current 3 tons to 5 tons.

South Korea’s love for seafood, coupled with the popularity of home meal replacements, is leading many food companies to develop new products.

Home meal replacements, majority of which used to offer meat or rice-based food, are now shifting to seafood.

Dongwon Industries has in place more than 20 kinds of salmon-based home meal replacements, including the Dongwon Air Express Smoked Salmon, which grew in sales by 40 percent last year.

“We expect the next boom will be coming from grilled salmon,” said Dongwon Industries. “So we invested in Silver Bay Seafoods in Alaska in 2014 to prepare for the shift in preferences.”

Shinsegae Food introduced 10 kinds of salmon-based home meal replacements that can be used on salad, pasta, steak, and other food.

Among them, the ‘Bono Bono Salmon Steak’, developed jointly with Norway’s Lerøy Seafood Group ASA, is being sold by the thousands every month online.

“We are also offering salmon-based pasta and pizza at various outdoor restaurants including Vecchia & Nuovo and the Devil’s Door,” said Shinsegae Food.

“We plan to develop B2B salmon products for sushi and grill, as well as salmon-based home meal replacements for ordinary consumers.”

CJ Cheiljedang Corp., after years of research and development, released Gyejeol-Obo, a new canned seafood brand that uses apple extract to kill off the fishy smell.

“We will continue to develop various products that are easy for cooking and storage,” said CJ.