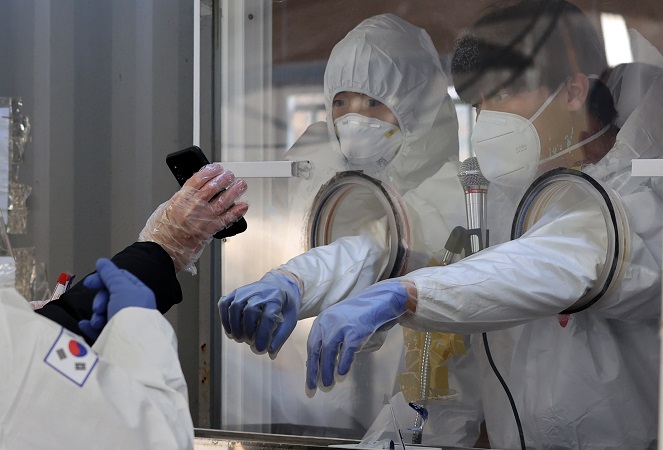 In this file photo taken on Jan. 19, 2021, a foreign national (R) reads a translation of a Korean message on coronavirus tests at a temporary testing station in central Seoul. (Yonhap)

SEOUL, Feb. 27 (Korea Bizwire) – The number of foreigners diagnosed with COVID-19 in South Korea has soared this year due mainly to the steady outbreaks of cluster infections at industrial workplaces, a government agency said Saturday.

According to the Central Disease Control Headquarters, 1,747 foreign nationals have tested positive for the coronavirus here since the beginning of the year, accounting for 6.6 percent of all domestic cases in the same period.

The growth of foreign COVID-19 patients was particularly steeper over the past one month, and the foreign patient tally was 2.7 times higher than before the Lunar New Year holiday, which fell on Feb. 12.

By region, Gyeonggi Province, which surrounds Seoul, accounted for 47.1 percent of all foreign patients in the first two months of the year, with Seoul, South Chungcheong Province and Incheon representing 28 percent, 6.5 percent and 5.4 percent, respectively.

There were 13 cases of infection clusters involving a large number of foreign nationals in the two-month period, the agency said, adding foreigners accounted for 61.4 percent, or 398, of all 648 infections reported from the 13 clusters.

In one of the most noteworthy cases, an infection cluster tied to a plastic manufacturing plant in Namyangju, east of Seoul, has so far reported 124 foreign patients. The foreign employees reportedly lived together in the plant’s dormitory.

In response, quarantine authorities have been conducting intensive coronavirus field inspections at foreigner-dense areas and workplaces.

The Ministry of Justice has also announced a decision to allow all foreigners staying illegally in South Korea to take coronavirus tests free of charge without disclosing their identities.

It said crackdowns on illegal stayers will be temporarily suspended to help minimize loopholes in the nation’s ongoing fight against the pandemic.