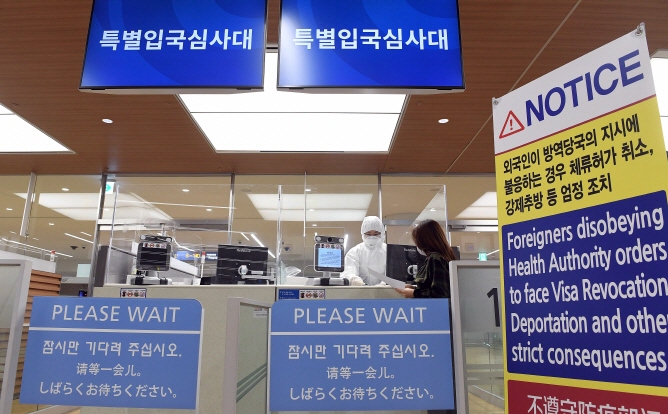 SEOUL, May 11 (Korea Bizwire) — South Korea is set to enforce a maximum sixfold increase in the monetary penalty for foreign violators of the mandatory self-isolation rule, as part of its reinforced coronavirus-fighting measures, the Ministry of Justice said Monday.

Under the quarantine measures that took effect in early April, all entrants from overseas — both Koreans and foreigners — are obliged to self-isolate at their residences or government-designated facilities for 14 days.

According to the ministry, any foreigner caught leaving his or her self-isolation place without permission will be slapped with a fine of 3 million won (US$2,460), up sharply from the current 500,000 won, under a revision of the Immigration Act’s Enforcement Rules.

Making an advance legislation notice for the revised rules, the ministry said they will take effect by the end of this month.

“As the COVID-19 pandemic is expected to be protracted, it is very important for foreign visitors to abide by the self-quarantine rules to help maintain the basis of opening and stem the spread of the virus,” a ministry official said.

“The prevention effects from the current amount of penalties for self-isolation violators have been considered weak,” the official said.

Foreigners refusing to accept the compulsory 14-day self-isolation are not allowed to enter the country under the quarantine measures. Violators of the self-isolation rules are fined and deported.

In April, a total of 18 foreigners were deported for violating self-isolation rules or refusing to comply with the government’s mandatory self-isolation.

The country reported 35 more cases of the new coronavirus Monday, the biggest single day spike since April 9, bringing the nation’s total infections to 10,909.