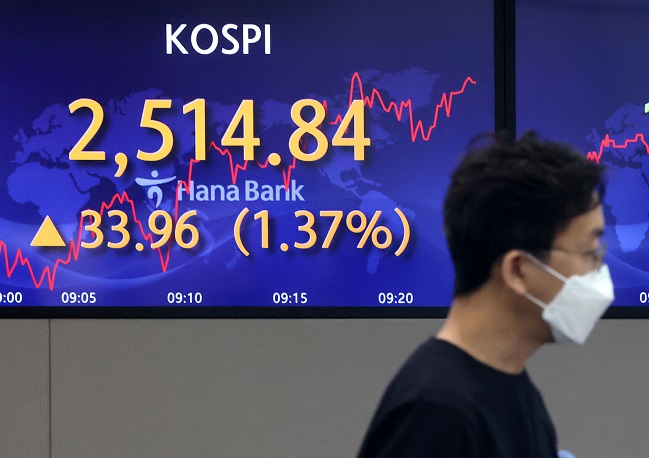 This photo, taken Aug. 11, 2022, shows the movement of South Korea’s stocks and currency on monitors at a dealing room of Hana Bank in Seoul. (Yonhap)

Foreigners’ stock investment funds recorded a net inflow of US$160 million in July, a turnaround from a net outflow of $3.01 billion the previous month, according to the data from the Bank of Korea (BOK).

It marked the first net inflow of foreign funds into the local stock markets since January, when such funds came to a net inflow of $1.81 billion.

The stock funds inflow came as investors viewed the Fed’s rate decision in July as less hawkish, according to the BOK.

Last month, the Fed raised the federal interest rate by 75 basis points for the second straight month to tame inflation. The rate decision was less aggressive than expected as market players raised their bets on a 1 percentage-point hike before the July policy meeting.

Foreign investors also purchased a net $3.54 billion worth of local bonds last month, up from a net inflow of $2.23 billion in June, the BOK said.

Offshore investors thus bought a net $3.7 billion worth of local securities last month, a turnaround from a net outflow of $780 million.

Meanwhile, volatility in South Korea’s currency eased in July from the previous month, the BOK said.

The daily fluctuation of the dollar-won exchange rate came to an average of 5.2 won, down from 6.8 won a month earlier.