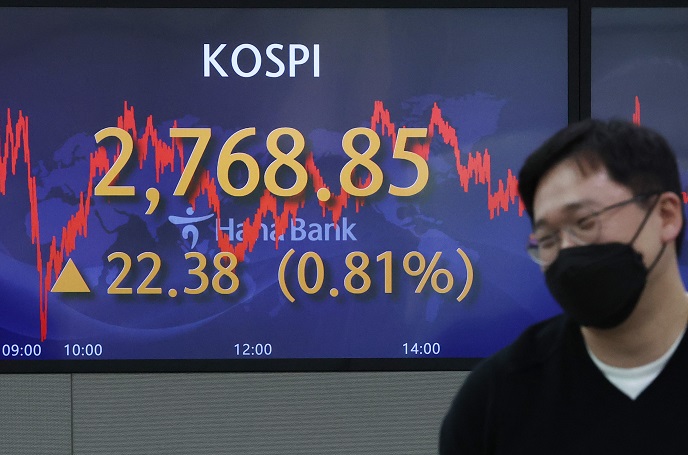 An electronic signboard in the dealing room of Hana Bank in Seoul on Feb. 9, 2022, shows the benchmark Korea Composite Stock Price Index (KOSPI) having gained 22.38 points, or 0.81 percent, to close at 2,768.85. South Korean stocks closed higher for a second day in a row amid hopes of strong corporate earnings. (Yonhap)

Foreigners picked up a net US$1.81 billion worth of local stocks last month, according to the data provided by the Bank of Korea.

The amount, however, was halved from their net purchases in December of $3.69 billion, the data showed.

Foreigners’ net stock purchases here came despite the increased risk-averse tendency amid expectations that the U.S. and other major countries will move to tighten their monetary policies.

Local IPOs, including that of LG Energy Solution, drew $3.23 billion from foreign investors last month, which marked a new monthly high that exceeded the previous record of $2.3 billion set in August, according to the data.

Foreigners also purchased a net $3.16 billion worth of local bonds in January, the 13th straight month of their net buying in the fixed-income market. It was still smaller than the previous month’s $4.85 billion.

Their total net purchases of local securities — stocks and bonds — came to $4.97 billion in January, though the amount was far smaller than $8.54 billion tallied a month earlier, the data showed.