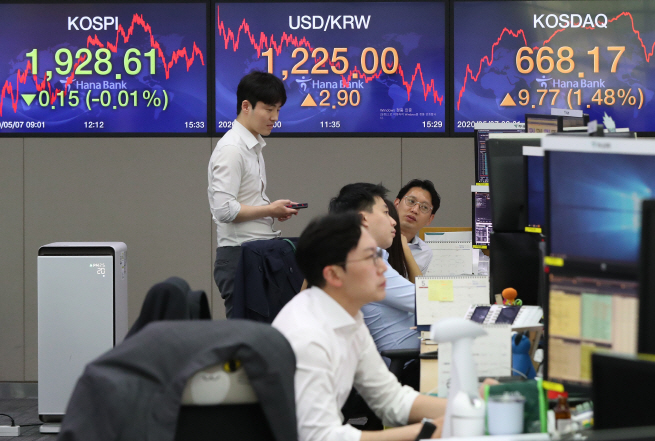 Currency dealers work in front of an electronic signboard at the headquarters of Hana Bank in Seoul on May 7, 2020. (Yonhap)

Offshore investors held 140.9 trillion won (US$115 billion) worth of listed government and corporate bonds as of end-April, up 17 trillion won from the end of last year, according to the data from the Financial Supervisory Service.

It marks the first time that foreigners’ holdings of South Korean bonds have surpassed the 140 trillion-won mark.

Despite the global financial turmoil sparked by the coronavirus outbreak, offshore investors snapped up South Korean bonds worth 7.4 trillion won in March and 9.3 trillion won in April.

Foreigners’ increased exposure to South Korean bonds contrasts with their pullout from the local stock market over the cited period.

Offshore investors pulled 12.5 trillion won and 4.1 trillion won out of the local equity market in March and April, respectively.

It also compares with international investors’ exit from emerging markets this year.

In the first four months of the year, foreigners withdrew some $41 billion from emerging market bond funds, according to the Korea Center for International Finance.

Standard & Poor’s Global Ratings grants an “AA” long-term sovereign credit rating on South Korea, the same as that on Britain, France and Belgium.

In early April, the Bank of Korea (BOK) froze its policy rate at 0.75 percent amid a grim growth outlook due to the COVID-19 outbreak.