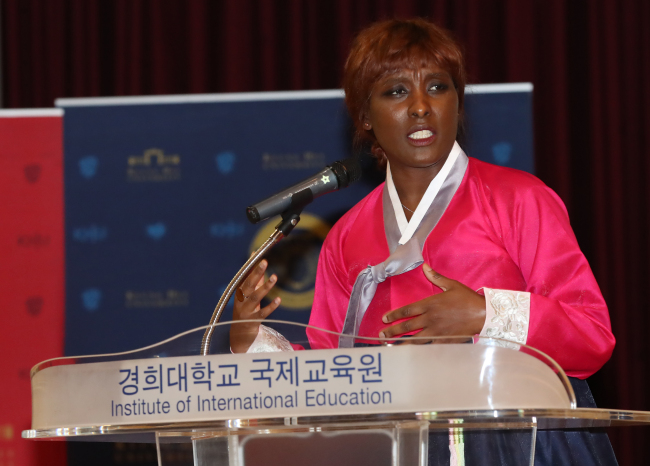 Leyla Bah, student of Kookmin University, talked about how Korea’s hierarchical order gives her a sense of stability. (image: Yonhap)

Competition was fierce at the 21st “World Korean Language Speech Contest for Foreigners” co-hosted by Kyung Hee University and Yonhap News Agency, in which 16 contestants from 12 countries vied for the top prize of 1.5 million won.

The preliminary round drew 1,195 participants from 55 nations.

This year’s topics were “Unique presence of Korea in the world” and “Hidden charms of Korea.” Many contestants spoke of Korea’s unique sentiment of “jeong” translated loosely as “affection.”

Contestants said they liked the warm culture of Korea that prioritizes “us” over “me.”

The grand prize was awarded to France’s Leyla Bah, who is a student at Kookmin University in Seoul. In fluent Korean, Bah talked about how Korea’s hierarchical order gives her a sense of stability.

From table manners to work culture, the hierarchical structure allows one to know his or her exact place within society, said Bah.

Prof. Kim Jung-seob at Kyung Hee University, the head judge of the contest, said, “The contestants were fully expressive in Korean which made it hard to decide upon the winner.”

In his introductory speech, Dr. Hong Yun-ki, Director of Kyung Hee’s Institute of International Education, said that the contest was created to glean insight into foreigners’ impression of Korea.

The event was first held in 1998, to mark the 600th birth anniversary of King Sejong. In the contest’s first year, 56 people from 11 countries participated in the event, and throughout the years, the number of participants has grown substantially.

From 2009 onwards, more than 1,000 participants yearly applied to compete in the contest.