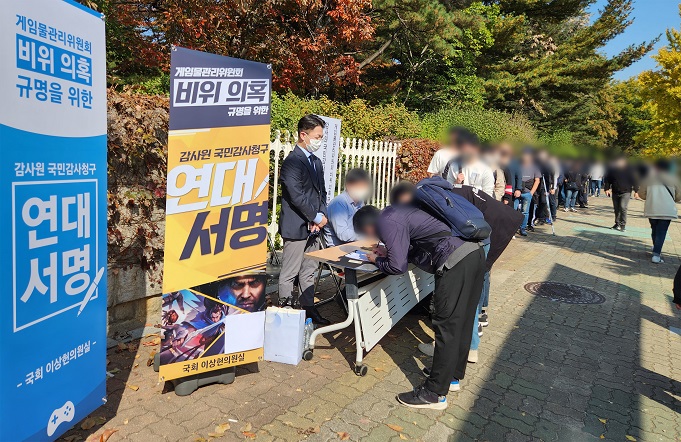 Gamers line up to sign the petition calling on the Board of Audit and Inspection to examine the Game Rating and Administration Committee in front of the National Assembly in Seoul on Oct. 22, 2022. (Yonhap)

SEOUL, Oct. 31 (Korea Bizwire) — The Game Rating and Administration Committee (GRAC) recently recommended restricting some sub-culture games to an adult-only level, raising disputes over unfairness in its deliberations. Such disputes are now threatening the existence of the committee.

The office of the Rep. Lee Sang-heon of the main opposition Democratic Party on Saturday collected signatures from citizens in front of the National Assembly in Seoul for a petition calling on the Board of Audit and Inspection to examine the GRAC.

The lawmaker’s office originally planned to collect signatures from 300 citizens, but the number of gamers who participated in the petition increased over time, reaching 5,080 in just six hours.

Most of the citizens standing in line in the street in front of the assembly building were young people in their 20s and 30s.

Although they enjoy different genres of games, they shared the view that the GRAC’s game classification standards was unfair.

“This is not someone else’s concern. Due to the GRAC’s unfair censorship, a song in the game I played was deleted and the game became restricted to an adult-only level,” a 21-year-old college student Chung Gang-hyun said.

“It doesn’t make sense for the GRAC not to hear the opinions of the gamers in its deliberations.”