The record, “IT’z ICY,” is the four-member band’s first EP since its debut in February with two singles, including “Dalla Dalla.”

“Dalla Dalla” set a record as a K-pop single that topped 100 million YouTube views in 57 days, the shortest time span for any K-pop debut band, launching the female band onto the forefront of the K-pop scene.

The new EP’s title track “ICY” is another confident, powerful number and the first ITZY song created by Park Jin-young, an old school K-pop star and the chief of the band’s management agency, JYP Entertainment.

“I am pleased and honored to have our first joint work with the producer (Park),” team leader Yeji said. “Including the producer, so many prominent composers and writers poured their best efforts, so I am excited about our latest work,” she said.

“‘ICY’ is a sort of extension of ‘Dalla Dalla’ with the same message. But it’s a summer song that has more cool beats and upbeat air,” member Lia said. 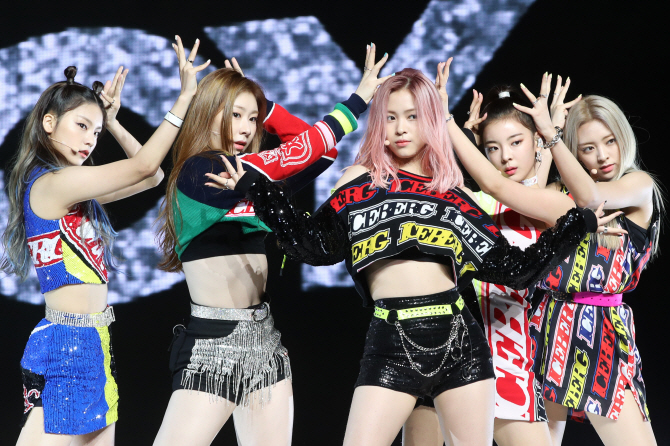 The five-track EP carries a remix of the band’s debut hit “Dalla Dalla” and four new songs — the title track, “Cheery,” “It’s Summer” and “Want It?”

Having recorded a smash hit with their debut single, which won a total of nine prizes in TV K-pop competition shows, the members are excited to return to the K-pop scene with their first physical music record.

“Rather than feeling pressure (over chart performance), I am hopeful that (many people) could join us and enjoy (the song),” member Ryujin said.

“The new song ‘ICY’ is as powerful as ‘Dalla Dalla’ in terms of choreography, but it has the added charm of female confidence,” according to member Chaeryeong.

The youngest member, Yuna, said that she hopes to dominate the summer K-pop scene with the new music. “With this latest album, I want to make people think of ITZY when they think about summer,” she noted.