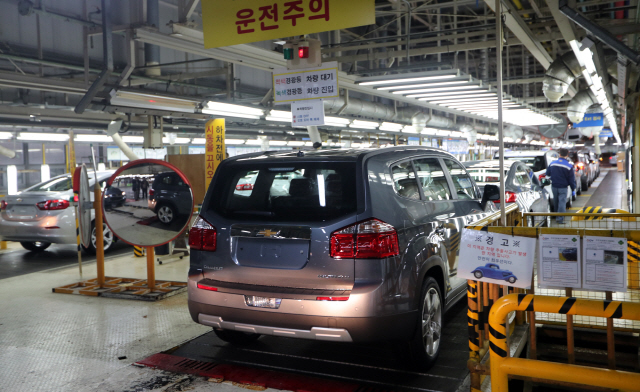 On Tuesday, the South Korean unit of General Motors Co., said it will shut down one of its four plants in South Korea by May as part of its broader global business restructuring and plans to spend US$850 million to restructure its Korean unit.

The decision was hailed by U.S. President Donald Trump, who said at a trade-related meeting at the White House, “(GM is) going to move back to Detroit.”

GM picked rising labor costs as a main reason for the planned closure of the 260,000-unit-a-year plant in Gunsan, about 270 kilometers south of Seoul. But GM Korea’s labor union rejected the argument, saying the Detroit carmaker’s “mismanagement” is behind the “unilateral” decision.

The company, which earns 85 percent of its sales from exports, cited high labor costs and weakening demand for its vehicles as the major reasons for its poor performance.

GM President Dan Ammann recently told Reuters that GM’s decision to invest in new models for the remaining three plants depends on the Seoul government’s willingness to provide financial aid to the Korean unit and on GM Korea’s union’s willingness to agree to cut costs.

However, the union said GM’s managerial mistakes caused the current situation. They said the U.S. carmaker has extended loans at high rates, received funds for the use of its operating expenses from its Korean unit and delivered Korean-made Chevrolet vehicles to GM for sales in the U.S. at low prices.

In a parliamentary hearing last year, lawmakers raised questions about the fact that GM Korea borrowed more than 2 trillion won for the four years through 2016 from GM affiliates and paid “excessive” interest rates worth over 462 billion won in total.

They also took issue with GM Korea having paid tens of billions of won each year to the parent firm to help with the global cost of operations.

Moreover, they pointed out that GM Korea had posted poor performances by delivering its vehicles at low prices for global sale by GM.

GM is now in talks with the Seoul government and GM Korea’s labor union for a breakthrough to turn the loss-making Korean unit around.

GM hopes the ongoing discussions will demonstrate significant progress by the end of February, when it will make its key product allocation decisions.

After expressing deep regret over GM’s “unilateral” decision to shut the Gunsan plant, however, the government said Seoul’s support depends on GM’s new investments into its Korean operations.

Seoul said it wants to conduct an audit of GM Korea before considering options to help with GM’s restructuring plan. GM Korea’s union said it will fight management’s decision to pull out.

In recent years, GM has scaled back or shut down plants in unprofitable markets such as Europe, India, Russia and South Africa, dealing a blow to GM Korea, which exports more than half of its vehicles. GM sells Chevrolet and Cadillac brand cars in Korea.