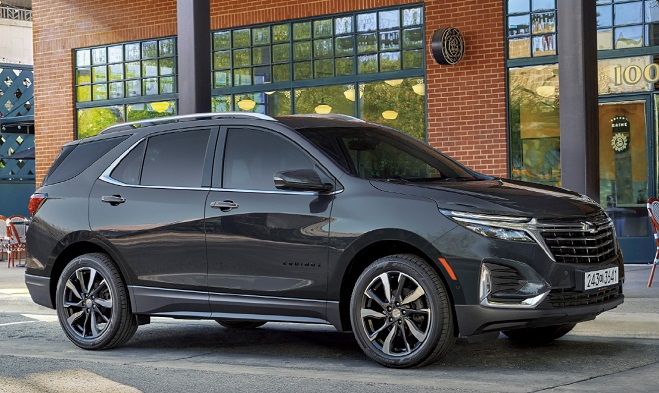 This file photo provided by GM Korea shows the upgraded Equinox SUV to be introduced in the Korean market next month.

SEOUL, May 25 (Korea Bizwire) — GM Korea Co., the South Korean unit of General Motors Co., said Wednesday it will add the upgraded Equinox SUV to its lineup next month to prop up its sales here.

The midsized Equinox comes with a 1.5-liter gasoline turbo engine instead of the 1.6-liter GM Ecotec diesel engine mated to the previous version model, the company said in a statement.

The facelifted model’s prices and other details will be released later, the statement said.

Its lineup is composed of four locally assembled models — the Spark mini car, the Malibu sedan, and the Trailblazer and Trax SUVs — and five imported ones — the Colorado pickup, the Bolt all-electric car, and the Equinox, Traverse and Tahoe SUVs.

The strengthened SUV lineup will help GM Korea actively respond to its Korean customers’ diverse needs for outdoor and leisure activities, including camping, yachting, kayaking and caravaning, the company said.

The company plans to introduce several electric vehicles by 2025, including the updated Bolt EV and Bolt electric utility vehicle, which are set to be delivered to customers in the second quarter.