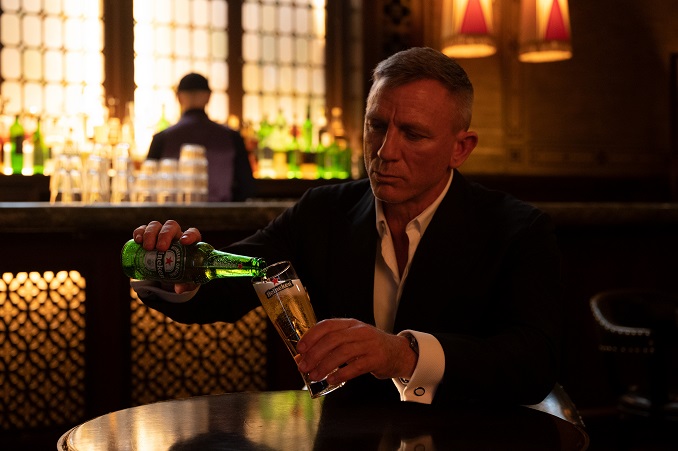 Heineken® today reveals a new commercial concept in collaboration with Daniel Craig called ‘Worth The Wait’, which celebrates the highly anticipated release of the new James Bond film No Time To Die.

LONDON, Sept. 15 (Korea Bizwire) — Heineken® today reveals a new commercial concepted in collaboration with Daniel Craig called ‘Worth The Wait’, which celebrates the highly anticipated release of the new James Bond film No Time To Die. The advert shows Daniel Craig waiting patiently for the first satisfying sip of an ice-cold Heineken® beer, an ode to fans who have eagerly awaited the next installment of the franchise and showing that the best things come to those who wait.

The Worth the Wait film is available here.

No Time To Die will be released internationally in cinemas from September 30 2021 through Universal Pictures International and in the U.S. on October 8 from Metro Goldwyn-Mayer (MGM) via their United Artist Releasing banner.

Bram Westenbrink, Global Head Heineken® Brand, said: “Heineken® has been a proud partner of James Bond films since 1997. So, like all Bond fans, we also can’t wait for No Time To Die to hit cinemas. That said, we believe some things really are worth waiting for. And now we can prove it. Whether it’s an ice-cold Heineken® or an action-packed Blockbuster – the best things truly do come to those who wait.”

Testing the truth behind the sentiment, Heineken® carried out a real-world social experiment to prove that good things are indeed worth the wait. In the experiment, 115 people were given cold Heineken® or Heineken® 0.0 beer at intervals between 0-30 minutes, showing that people who waited 20 minutes had the highest levels of satisfaction.

Daria A Bakina, PhD, Social Psychologist and Research Director at Edelman Data & Intelligence, said: “This research follows a long tradition of conducting experiments in the “real world”, under real circumstances, within the field of social psychology. The findings of this study show that waiting may not be a bad thing – in fact, there’s more enjoyment after needing to overcome an obstacle like a 20 minute wait for a refreshing “Perfect Pour.”

Further information on research findings is available on request.

HEINEKEN has a well-balanced geographic footprint with leadership positions in both developed and developing markets. We employ over 85,000 employees and operate breweries, malteries, cider plants and other production facilities in more than 70 countries. Heineken N.V. and Heineken Holding N.V. shares trade on the Euronext in Amsterdam. Prices for the ordinary shares may be accessed on Bloomberg under the symbols HEIA NA and HEIO NA and on Reuters under HEIN.AS and HEIO.AS. HEINEKEN has two sponsored level 1 American Depositary Receipt (ADR) programmes: Heineken N.V. (OTCQX: HEINY) and Heineken Holding N.V. (OTCQX: HKHHY).

ABOUT NO TIME TO DIE
No Time To Die is the official title of the 25th James Bond adventure. The film — from Albert R. Broccoli’s EON Productions, Metro Goldwyn Mayer Studios (MGM), and Universal Pictures International — is directed by Cary Joji Fukunaga and stars Daniel Craig, who returns for his fifth film as Ian Fleming’s James Bond 007.

Written by Neal Purvis & Robert Wade (Spectre, Skyfall), Cary Joji Fukunaga, and Phoebe Waller- Bridge (Killing Eve, Fleabag), the film will be released globally from September 30 2021 through Universal Pictures International and on October 8 in the US through MGM via their United Artists Releasing banner.

In No Time To Die, Bond has left active service and is enjoying a tranquil life in Jamaica. His peace is short-lived when his old friend Felix Leiter from the CIA turns up asking for help. The mission to rescue a kidnapped scientist turns out to be far more treacherous than expected, leading Bond onto the trail of a mysterious villain armed with dangerous new technology.
www.007.com

MGM
Metro Goldwyn Mayer (MGM) is a leading entertainment company focused on the production and global distribution of film and television content across all platforms. The company owns one of the world’s deepest libraries of premium film and television content as well as the premium pay television network EPIX, which is available throughout the U.S. via cable, satellite, telco, and digital distributors. In addition, MGM has investments in numerous other television channels, digital platforms, interactive ventures, and is producing premium short-form content for distribution. For more information, visit www.mgm.com.

United Artists Releasing, a joint venture between Metro Goldwyn Mayer (MGM) and Annapurna Pictures (Annapurna), is a U.S. theatrical releasing company. Built upon the legacy of the iconic United Artists motion picture studio, the joint venture provides a home where filmmakers are supported by thoughtful approaches to marketing, publicity and distribution. United Artists Releasing offers content creators an alternative distribution option outside of the studio system and supports Annapurna and MGM’s film slates as well as the films of third-party filmmakers.

Universal Pictures International (UPI) is the international marketing and distribution division for Universal Pictures. In the United Kingdom, Ireland, Spain, Italy, Germany, Austria, Switzerland, the Netherlands, France, Russia, Korea, Australia, New Zealand, Mexico and China (including Hong Kong SAR), UPI directly markets and distributes movies through its own offices, creating local campaigns and release strategies. In other parts of the world, UPI partners with Warner Bros, with Paramount through United International Pictures (UIP), and with Sony, either directly or through UIP, to distribute its films. Universal Pictures is part of NBCUniversal, one of the world’s leading media and entertainment companies in the development, production, and marketing of entertainment, news, and information to a global audience. NBCUniversal is a subsidiary of Comcast Corporation.

A photo accompanying this announcement is available at https://www.globenewswire.com/NewsRoom/AttachmentNg/0c389a2a-bede-4037-8b93-58520c843bf1