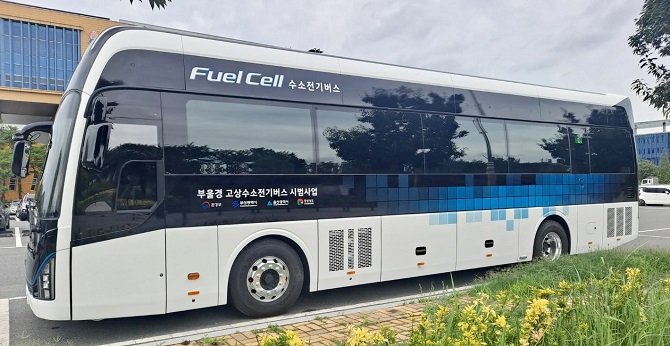 This photo provided by the South Gyeongsang provincial office shows a a high-floor hydrogen-powered bus.

GIMHAE, Aug. 12 (Korea Bizwire) – Hydrogen fuel-cell buses made by a South Korean manufacturer will be deployed as intercity buses nationwide this year.

The Ministry of Environment, joined by three metropolitan cities and provinces, will test drive a high-floor hydrogen-powered bus, to be released by Hyundai Motor Co. later this year for one intercity route, three commuting routes and one shuttle-bus route.

The high-floor bus has a floor that’s 1 meter higher than the ground, requiring passengers to climb up a few steps to embark.

The carmaker’s hydrogen fuel-cell bus will operate on an intercity route that goes between Jinju, Busan and Ulsan on Aug. 12 and from Aug. 16 to 19, covering 335 kilometers daily.

Lastly, the bus will operate on a shuttle-bus route between Incheon’s Geomam subway station and the Environment Research Complex (8 kilometers, 10 times per day) from Sept. 13 to 15.

The bus will cover a distance of 3,500 kilometers during some 30 days of testing.