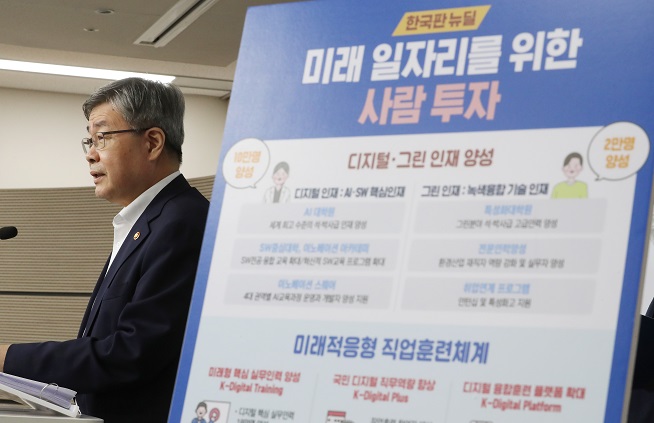 Labor Minister Lee Jae-gap explains on how the government’s “New Deal” project will help provide stability to workers, during a press briefing at the government complex in the administrative city of Sejong, on July 20, 2020. (Yonhap)

With the plan, some 21 million people are forecast to be covered by the state employment insurance scheme by 2025, compared with the current figure that falls short of 14 million.

The five-year project does not include soldiers, public servants and faculty at private schools who are covered by separate insurance programs.

The expansion is aimed at protecting temporary workers and freelancers who are regarded as being in a “blind spot” as they are not directly employed by companies and are not covered by employment insurance.

By job, it would bring in artists and people who are hired under special contracts — such as delivery workers, insurance agents and caregivers — into the national insurance system, making them eligible to receive jobless benefits when they lose their jobs.

It would also allow them to apply for government subsidies for pre- and post-maternity leave as well as parental leave.

To prepare for the expansion, the government said it plans to establish a system to verify the income of these workers and carry out necessary legal revisions.

As part of the “New Deal” project, the ministry said it also plans to expand work injury insurance programs and government subsidies for low-income job seekers.

Also among the plans are providing internships at public and private sector companies as well as non-governmental organizations. The government also aims to foster more IT jobs for younger job seekers and expand relevant job training courses.

Last week, President Moon Jae-in announced plans to invest 160 trillion won (US$133 billion) by 2025 to create 1.9 million jobs under the Korean version of the New Deal.

He described it as a campaign for the “grand transformation” of the nation in preparation for the post-coronavirus era.